Will the student(s) who video-recorded the classroom fight at Ridge View High School yesterday be disciplined?

The School Board spent a lot of time gnashing their teeth and word-smithing a revision to a Board Policy that pertains to use of cell phones in schools. That Policy may have been directed at employees, rather than at students.

Obviously, at least one student had a cell phone handy yesterday, when a fight broke out between a student and a teacher (teacher, not employee, per WIS-TV).

Policy JICJ Use of Electronic Communication Devices in School

Policy JICJ reads, in part: "Students are prohibited from using ECDs to capture, record or transmit the words (i.e. audio) and/or images (i.e. pictures, video) of any student, staff member or other person in the school or while attending a school-related activity without express prior notice and explicit consent for the capture, recording or transmission of such words or images. Using an ECD to take or transmit audio and/or pictures/video of an individual without his/her consent is considered an invasion of privacy and is not permitted, unless authorized by the building principal." (Last revision 8/11/2015)

A better question is why didn't the students in the room intercede and stop the fight? Surely, there were some decent-sized boys in the room who could have separated them. WIS-TV inaccurately reported the fight and failed to comment on the engagement by the student. Notice how he doesn't step back when the two are temporarily apart.
at May 29, 2019 No comments:

Nary a word was spoken

Guess it's a good thing I didn't wear my favorite tie to last night's Richland 2 School Board meeting. I came >>>/this/<<< close to wearing it. 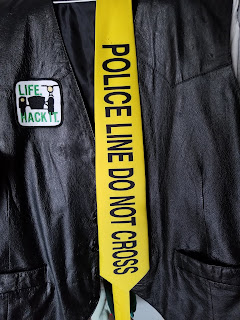 You'd have thought all was quiet on the Western Front. Nary a word was spoken about an fight earlier in the day involving an employee (teacher?) and a student at Ridge View High School, one of Richland 2's five high schools.

Wouldn't you think there would have been some mention at the school board meeting? Okay, so no details. But why treat people showing up at a school board meeting like mushrooms? There was a valuable "teaching moment" about transparency, and the Board missed it.

The principal of Ridge View HS was at the school board meeting. Was the principal, Brenda Mack-Foxworth, Ed.D. told, in no uncertain terms, that she was not to mention one word about the fight?

Maybe the rule is, "If it ain't on the Agenda, we ain't talkin' 'bout it." Do you think that, if the R2i2 building caught on fire, there would be no announcement because it wasn't on the Agenda?

Let's see if Richland 2 throws the teacher under the bus. The smart move will be to make a thorough, independent investigation of what happened, who started it, who prolonged it and what previous trouble, if any, there had been with that student.

Richland 2 might do that, but what the public will hear is, "The District does not comment on personnel matters."

Will the kid be arrested for disturbing schools or assaulting a teacher?
at May 29, 2019 No comments:

At last night's Richland 2 School Board meeting Trustee James Manning was absent. His name plate was there, but he wasn't. Not only that, his name was never mentioned during the meeting.

You may remember my comments about the lengthy message read by Supt. Davis, when Amelia McKie missed a meeting. It went on and on. So where was a mention last night about Mr. Manning's absence?

When it came time for votes last night, any record of his vote (or lack thereof) was ignored. The four choices for a vote on a Motion are:
Yes
No
Abstain
Not Present at Vote

Was this a subtle snub at Mr. Manning by the person in charge of the meeting? Was it intentional or just done in ignorance?

One of these days the School Board is going to have to review ALL votes taken on and since November 13, 2018. Votes that came out as 3-4 (Failing), such as on the Resolution to allow the Board to remove an Officer, actually would have Passed, when the votes of McKie and Holmes are tossed out. Other votes, for example, on student matters would have had different outcomes.

At last night's meeting the vote by the Board to pass the proposed Agenda for the June 11, 2019 meeting actually failed. The vote was 4-2. But, when you toss the votes of McKie and Holmes, who are not legal members of the School Board, then the vote was 2-2. A tie-vote is considered failing. So there is no approved agenda for June 11, 2019.
at May 29, 2019 No comments: