Why did Holmes shift order of speakers?

Why did Teresa Holmes shift the order of speakers last night?

When the speakers' list opened for sign-up at 5:30PM, I was #9 to sign. Signatures are in ink, so there is no question about who signed when.

As I listened to the first eight speakers, I prepared to hear my name called and step forward to the microphone. However, Teresa called Larry Smalls as the ninth speaker. Larry is great speaker and also entertaining, too. Be sure to watch the Public Participation, when Richland 2 gets around to posting it on livestream.com/richland2

Teresa has trouble with names. For some reason she can't pronounce Gary Ginn's name. Last night it sounded by "Gwinn".

Julie Weaver is often introduced as "Julia". Does Holmes need glasses, or does she have a reading disorder? Should someone coach her about pronunciation of names?

Had Public Participation ended without my being called to speak, I was prepared to assert my privilege to speak, since I had been #9 to sign up. Maybe she was hoping I'd leave, instead of waiting...

I ran out of time, because I stopped speaking at one point when I noticed that both McKie and Caution-Parker had their heads down and were busy writing. I'm pretty sure they weren't taking notes on what I was say. So I stopped and waited for their attention. The silence in the room didn't cause either of them to look up.

The video of last night's meeting is now available on YouTube at https://youtu.be/56lks0GbCfs
At this time (11/17/2021 6:43PM) it is not yet available on the District's website or on livestream.com/richland2
The video has been altered to remove the unrecorded 1¼-hour executive session. I did not yet view the video to see whether anything else has been removed. Even with those items removed, the video is THREE hours 24 minutes long. Out. Of. Control.
[Edited 11/18/2021] The remarks by the father of the elmentary school student have been scrubbed from the video that is posted to YouTube. In place of the father's remarks is this notice 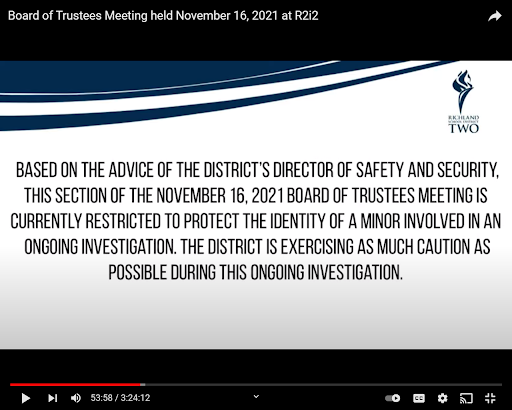 Is there anyone on the planet who believes that the "Director of Safety and Security" gave the "advice" not to post that parent's comments? Seriously? The guy just works there. Why hang him out to dry (and not even mention his name)?
The buck stops at the superintendent's office. Why didn't the superintendent take responsibility and put HIS name on the announcement? That's the $64,000 Question. For $1 I'll give you the answer.
Did you notice how the superintendent didn't even pipe up after the father spoke? Nor did Holmes!
If you'd like to hear the father's remarks, go here:   https://www.blythewoodonline.com/2021/11/richland-2-admin-accused-of-strip-searching-student/
at November 17, 2021 No comments:

Should Richland 2 be sued?

If the Richland 2 School District continues to delay publishing the video of last night's school board meeting or deletes the portion of the meeting when the father informed the board of the searching of his elementary school child, should the District be sued.
If you think it should and if you will support such a lawsuit, please email your expression of interest to gusphilpott@gmail.com  There will be no publication of your name or email address here. I'll collect the names and email addresses and keep you posted (by bcc:) of the level of interest.
The delay by the District in publishing the videorecording on livestream.com/richland2 is preposterous and creates added furor to this mess. The effort to suppress information is not what one expects of a supposedly-responsible board of trustees or superintendent.
Most will accept their natural reluctance to make any public statement. Anything that is said officially will be vetted by their lawyers, whether internal or external.
The father spoke in public. The District is 100% wrong to suppress his statements.
Be sure to read today's article in The Voice of Blythewood & Fairfield County. Listen to the audio of the father speaking to the Board on November 16, 2021 (yesterday).
at November 17, 2021 No comments:

The man did not speak about "an alleged incident". He spoke about something that he said happened! He was the 13th speaker of the evening.

There were about 50 members of the public there last night. All seats were taken. There were seven board members and the superintendent. There were plenty of Richland 2 staff members present, who get preferred seating between the board and the audience. Everyone in the room heard the man speak.

There was no "alleged" about it.

On the homepage of the Richland 2 School District is this announcement about last night's meeting.

During Public Participation at the November 16, 2021 Board Meeting, an individual spoke about an alleged incident that was reported in an email to the district office on Sunday, November 14, 2021. The allegations were disturbing to hear just as they were disturbing to read about in the email. Dr. Baron R. Davis, superintendent, has assured employees and parents in an email that district administrators responded quickly after reading the email on Monday morning.

Administrators from the district's Human Resources office responded to the school Monday morning, November 15, to begin an investigation and to place the employee named in the report on administrative leave. Law enforcement began an investigation on Monday as well, and school and district administrators are fully cooperating with the investigators from the Richland County Sheriff's Department. The school principal talked with the parents to let them know that district administrators had started an investigation. Based on the advice of the district’s Director of Safety and Security, the availability of the livestream video from the board meeting is currently restricted to protect the identity of a minor involved in an investigation. The district is exercising as much caution as possible in order to not interfere with the investigations, and therefore, district leaders could not respond to the comments made during Public Participation at the board meeting. Additionally, the district must protect student privacy in accordance with the Family Educational Rights and Privacy Act (FERPA). In the letter to employees and parents, Superintendent Davis said, “Please know that Richland Two does not tolerate any type of misconduct involving students and always fully investigates any reports of possible violations of laws, policies and procedures. In responding to allegations, district and school administrators are required by privacy laws to protect the identity of all individuals involved during the investigation. We always fully cooperate with law enforcement to ensure that our actions do not interfere with or compromise the integrity of any criminal investigations. I want to reassure the entire Richland Two family that providing safe, nurturing and caring environments that support quality teaching and learning at all of our schools remains our top priority.”

WHERE IS THE RECORDING???

The Richland 2 School Board met last night (November 16, 2021), and the District has not posted the video-recording of the meeting as of 10:57AM today.

Recordings are normally posted shortly after the end of the meeting.

During the Public Participation segment of the meeting a parent addressed the board about an incident that had occurred at the Bethel-Hanberry Elementary School. Those in the conference room were shocked by his statements.

One member of the public received this reply from Libby Roof, identified on the District's website as the chief communications officer:

"Based on the advice of the district’s Director of Safety and Security, the availability of the livestream video from the meeting is currently restricted to protect the identity of a minor involved in an investigation. The district is exercising as much caution as possible during this ongoing investigation.

"During Public Participation, an individual spoke about an alleged incident that was reported in an email to the district office on Sunday, 11-14-21.  Those from the district's HR office responded to the school Monday morning, 11-15-21 to begin an investigation. Following board policy, the employee named in the report was placed on admin leave. LE began an investigation on Monday as well, and school and district administrators are fully cooperating with the investigators from the RCSD.

"I will let you know when we are able to make the video public."

I wonder why the District is hanging its Director of Safety and Security out to dry on this one. The buck stops right at the top - at the superintendent's desk. Safety and Security is responsible for the multitude of Richland 2 security officers who protect the public from the school board on meeting nights and who are regularly thanked for doing their duty in such a friendly manner.
One member of the public was ejected last night, when he rose to his feet and protested politely to the board following the parent's remarks.
This morning I sent the following email to Libby Roof, the full board, the superintendent, the in-house general counsel, and the outside attorney for the District.

Good morning, Mrs. Roof,
I notice that the recording of  last evening's board meeting has not yet been posted. Please post the recording in full without delay.
I understand the District may have some concern about the remarks of one parent. Those remarks are part of the public record and cannot be legally redacted from the recording. Should the District alter the public record by redacting all or a portion of that speaker's remarks, I am quite sure that the District can expect a very public lawsuit.
It was inexcusable that the chair or the superintendent had absolutely nothing to say after that parent's remarks. At the very least, the superintendent should have directed a staff person to speak with that parent before he left the meeting. That happened at a recent board meeting after parents expressed concerns of a less-serious matter.
Please post the full recording by 12:00PM today.

If the parent wanted his identity or the identity of his child protected, he would not have spoken in public about what had happened. The purpose of the District's action is clear to all for what it is.

A number of us spoke with the parent in the courtyard of R2i2 after the Public Participation segment, while the meeting continued. There were many offers of support to the family. We are outraged by what the parent had reported.

Speak up now. Email the Board and the superintendent and tell them it is too late to run for cover.