If you received this email from Richland 2 School District, at what time would you think the school board meeting would start? 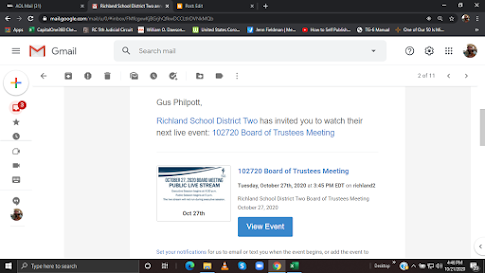 If you clicked on "View Event", you would first see 3:45PM there, too.

Then, if you kept looking and looked closely at the graphic, you would see that the Executive Session starts at 4:30PM and the Open Meeting starts at 5:00PM.

How many of you would keep reading after you first read 3:45PM?

When will McKie pay up?

When will Amelia McKie start paying off her debt to the South Carolina Ethics Commission? She owes $51,750!!!

If you are reading this, send her an email <ameliamckie@richland2.org> and tell her to pay. A judgment was filed in the Richland County Common Pleas court in July 2019. Ask her why she is not making any payments at all. Ask her how she intends to pay it off.

You might also call your State Senator and your State Representative and ask why the S.C. Department of Revenue is not collecting on the judgment. Good luck getting help from then. State Sen. Mia McLeod and State Rep. Ivory Thigpen ignore my communications to them about McKie's debt.

Where is my answer?

At the October 13th school board, my emailed communication was read to the board. I wrote:

I was optimistic that the Board Chair and the superintendent might have been listening. A week has passed, and there has been no reply. I'm not surprised. Board Chair James Shadd has not replied to any communication from me, starting with my email to him on July 4.

There is, of course, a way for me to get the answer, even when the district doesn't want to provide it. I can submit a Freedom of Information Act Request, and I'll receive a reply in two weeks. Is that what it will take?

If you missed the October 20th Richland 2 Candidates' Forum and want to know more about their positions, go to richland2.org/livestream and watch the replay.

You say you've already voted? Your mind is made up? You don't care?

The forum was sponsored by the Richland Two Teachers' Association and the League of Women Voters. Patrick Kelly, a Richland 2 teacher, served as Moderator. The LWV was nowhere in sight.

As I watched, I was reminded of a Presidential debate where Pres. Trump found himself facing a Democratic Party moderator. Kelly did a good job of reading the questions to each of the candidates, but I had a strong feeling that too many of the questions were teacher-based; i.e., if you are elected, what are you going to do for us?

The School Board should be composed of stewards who look fairly at all the interests to be represented. Teachers are only one slice of that pie. But they want an ever-increasing share of the money pie. Too much time last night was spent playing the tune sung by the teachers.

"Culture" was mentioned many times last night. The USA has gone nuts with focus on cultural, diversity, race, sensitivity, privilege. This has got to stop. Teach the subjects that students need to learn to get ahead in the world.

Too many parents and too many voters are not paying attention to the progressive leanings of the district, of the Board, of the Administration, and of the teachers. Students should be educated, not indoctrinated.

Why does the current board let him get away with it? Because the majority on the board will let him have anything he wants.

This District's goal should be to hire the best 100 teachers it can - male, female (ignoring the other 51 genders), black, white, brown, yellow, red, who can be hired for what Richland 2 will be paying.

One candidate said the student body is 70% black. Well, the USA is 13% black. Unless all Richland 2 graduates are planning to stay in Columbia, they should learn skills that will enable them to get along in the country and in the world.

Last spring an attorney gave me some great advice. He said, "You ought to run for the school board, because you would have a larger platform for saying what is wrong with the district. But you don't want to win." And he was right!

Who was it last night who took a poke at dissenting board members? There is a Board Policy that all board members are supposed to toe the line, once a policy is approved. Right now, Richland County's own "Squad" makes the rules in Richland 2, because it has the majority. This does not bode well for Richland 2.

How many politicians do we have in the United States with the wisdom of British MP (Tory) Kemi Badenoch? Any idea who she is? Do you know what "MP" is? On which side of the aisle a Tory sits?

How does she define Critical Race Theory? "...an idea that sees my blackness as victimhood and their whiteness as oppression."

She added, "We do not want to see teachers teaching their white pupils about white privilege and inherited racial guilt."

MP Badenoch said (7:19 in the video) her daughter had come home from school and told her, "We're learning black history month, because every other month is about white history." She said, "This is wrong."

Why I am posting this on the Richland 2 Unofficial Blog?

I watched the candidates' forum last night. After it ended, I just shook my head and decided that I was not going to comment. After all, I've already voted. However, after reading this article about MP Badenoch, I have decided that staying silent is wrong.