Richland 2 Lies to the Public

Click on www.Richland2.org and read the bald-faced lie about Friday's filing in the South Carolina Supreme Court.

A screen-print of the beginning of the article on the homepage of the District's website is below. I suspect they will quickly change it, when they realize the public isn't buying it.

The lies start with the very first sentence of Teresa Holmes' attempt to sell the filing of the case in the S.C. Supreme Court to the public.

- No "great sense of urgency" was ever expressed at the August 16th Special-Called Board Meeting.

- The Board did not authorize anything to be "put into action".

- No "desire" of Richland 2 to seek legal relief was discussed or approved by the Board in public.

- "truly nothing more important" may be her opinion (only)

- Holmes is not even a legitimate leader in the District. While she was elected on November 6, 2018, she has never taken the oath of office legally. She should not be sitting on the board, and she should not be board chair.

- Holmes violated Board Policy BBAA Board Member Authority and Responsibilities. ¶2 "Board members acting as individuals have no authority over personnel or school affairs except when such authority is specifically delegated to a member by the board."

- Did the Board ever specify the Solomon Law Group or Williams and Williams for legal work?

- What kind of deal was made that they would provide services pro bono? 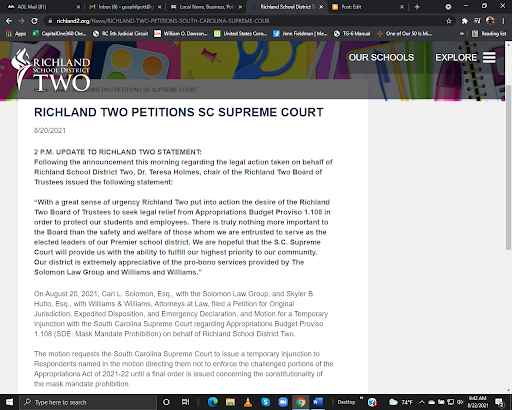