There is poor editing at the end of 1/11/2022 recording which Richland 2 has published on YouTube at https://www.youtube.com/watch?v=4gWtpQ_SGQY

Toward the end of the amended recording, the superintendent spoke and then trustee-elect Holmes spoke about the presentation on a survey regarding face masks.

Then Holmes' voice can be heard, stating, "I am making an executive order, an executive decision that this meeting has been adjourned."

While she is speaking, this screen is displayed. 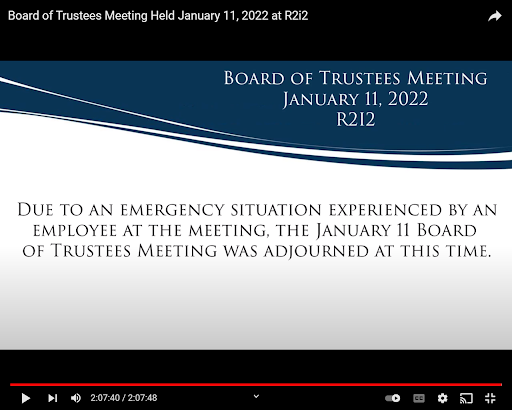 What was obviously cut out of the video was the view of Supt. Davis' health event. A period of time passed while he was assisted by some in the room and during which EMS arrived and removed him from the building. And then Holmes announced adjournment of the meeting.

The meeting was not adjourned at the time Holmes spoke. In the interest of accuracy, there is a better way that this ending of the meeting could have been conveyed. It's an editing issue by R2 staff, not of the board.

Click on "Watch on YouTube"
The January 11, 2022 Regular Board Meeting has been published on YouTube at https://www.youtube.com/watch?v=4gWtpQ_SGQY
Trustee Agostini explained why she votes No at every meeting on the item to approve the Board Agenda. Then Trustee Manning was recognized. A Parliamentarian would have shut him down, because he was responding to what Trustee Agostini had said and not commenting on the motion that was before the board. Because Holmes does not know the Robert's Rules of Order, she didn't stop Manning's comment. Notice his posture as he speaks. Leaning back in his chair. Rotating on the swivel. Arms folded. Body language says so much!
Notice also the long periods of time when Holmes holds her face-shield, rather than having it on her face!
Be sure to watch the segment for Item 5.0, approval of the Consent Agenda. That starts at 06:35. There were many parliamentary errors. Trustee-elect (and acting chair) Teresa Holmes ran over Trustees Agostini and McFadden, resulting in an important error in the Minutes' not getting corrected.
The Agenda for the December 14, 2021 had listed a hearing on ESSER 3. Holmes blew right by that at the December board meeting. Yet the Minutes reflect the ESSER 3 hearing, even though it was never held. The Minutes should have been amended.
The original motion to approve the Consent Agenda was made by McKie, seconded by Caution-Parker. Agostini made a motion to have the Consent Agenda broken up and each of the three items discussed separately. Agostini stated no second was required. Holmes didn't know. The superintendent agreed that no second was required. BUT THEN the superintendent erred in his opinion that McKie's motion had to be decided first.
This was wrong, because Agostini's motion was a secondary motion.
The Superintendent was wrong. The Chair was wrong. Manning was wrong.
Yet Holmes railroaded the Consent Agenda item through as shown on the Agenda. Big mistake.
Watch how Holmes (mis) handles Trustee Agostini's secondary motion to amend the Consent Agenda. Agostini's motion never got a vote.
Trustee McFadden's claim was accurate that proceeding with a vote on trustee-elect McKie's motion would eliminate any chance of amending the motion. And that's exactly what happened.
Why didn't Trustee Manning or Supt. Davis speak up and remind Holmes, yet one more time, about how to handle secondary motions? Why did they disregard that it WAS a secondary motion and brought up at the correct time?
Holmes wrongfully called for a vote on McKie's motion, and the Core Four, naturally, approved it 4-2--1 (Yes 4; No 2; Abstain 1)
SHAMEFUL!!!
Be sure to watch the Public Participation segment, which begins at 15:45
At least three of the speakers addressed the board's complete failure in handling the Consent Agenda item.
at January 12, 2022 No comments:

Why I address Holmes and McKie as trustees-elect

When I write to Teresa Holmes and Amelia McKie, I address them as trustee-elect. I do not address them as Trustee Holmes and Trustee McKie.
Why do I do this? I assure you - it is not intended as disrespectful. I address them in this manner because it is correct.
Holmes and McKie have never taken the oath-of-office legally. They remain trustees-elect.
An oath-of-office was administered to them on November 13, 2018, but neither was eligible to take the oath on that date. They had not filed their Statements of Economic Interests (SEI) with the South Carolina Ethics Commission, as required by State law.
As a result of contact by The Voice of Blythewood & Fairfield County newspaper, both filed their SEIs on December 4, 2018.
On December 4, 2018 each first became eligible to take the oath.
Neither has ever taken the oath since December 4, 2018.
I can only assume that a lawyer has advised the school district on this matter. If the lawyer told the District that there was no problem, I am doubtful about that advice.
The law is the law. The law was not followed. It's a short, simple law. Easy to understand. Easy to follow.  The South Carolina Code of Laws states:
ARTICLE 11
Disclosure of Economic Interests
SECTION 8-13-1110. Persons required to file statement of economic interests.(A) No public official, regardless of compensation, and no public member or public employee as designated in subsection (B) may take the oath of office or enter upon his official responsibilities unless he has filed a statement of economic interests in accordance with the provisions of this chapter with the appropriate supervisory office. If a public official, public member, or public employee referred to in this section has no economic interests to disclose, he shall nevertheless file a statement of inactivity to that effect with the appropriate supervisory office. All disclosure statements are matters of public record open to inspection upon request.
Here is the correct order.
1. File the SEI
2. Take the oath-of-office
3. Enter upon official responsibilities
The correct order is 1-2-3. The order is NOT 2-3-1.
It was suggested to me that the error was just a "technicality." Nope! Sorry. Good try. No pass.
Why have Holmes, McKie, the school board, and the school district dug in their heels? Why haven't the five legal Trustees insisted that Holmes and McKie take the oath-of-office legally? Why doesn't this come up at every board meeting?
If the board insisted that Holmes and McKie recuse themselves from any vote on the matter, a Motion to direct Holmes and McKie to remove themselves from the board until they take the oath-of-office legally would get a vote of 3-2, a passing vote. Agostini, Scott and McFadden would vote in favor. Manning and Caution-Parker would vote against, although they too ought to vote in favor.
In every communication to the board, I address Holmes as "trustee-elect Holmes" and McKie as "trustee-elect McKie". I shall stop so addressing them, as soon as they become legitimate members of the school board.
And because they are not legitimate members of the board, they cannot serve as Chair and Secretary, respectively. This means that all documents (school bond resolutions, etc.) are worthless, because legal signatures are not affixed. Thanks to Manning and Caution-Parker for creating this legal mess on June 29, 2020, when they nominated Holmes and McKie as board officers.
I invite you to do so, too.
at January 12, 2022 No comments: