How are your mind-reading skills? You are going to need them.

As the board prepared to vote on July 9 to re-instate Public Participation, Libby Roof, Chief Communications Officer for the District, explained (at 49:05 on the video-recording) that the public would be able to submit written comments by early afternoon on the day of the board meeting via a Google document that would become available when the notice of the board meeting was posted. Then the comments (up to three minutes per comment) would be read to the board during the meeting. The printed comments would be given to the board.

I came away from that meeting thinking there would be a link on the agenda that would take a reader to the comment form. That isn't how it will work. You must find the form on the District's website.

When I examined the agenda for the July 21st board meeting, I found nothing that would tell me where to find the comment form.

Late Friday afternoon, an email from the District to media contacts provided a link to the location of the Comment Form on the District website. Here is that link:
www.richland2.org/School-Board/Public-Participation

The big question is, how will a member of the public ever find that form? The District has made it unnecessarily difficult for the public by hiding the form on the website.

Where is it?
Go to the the District's website at www.Richland2.org
Click on EXPLORE
Click on School Board
Click on PUBLIC PARTICIPATION
Scroll down, fill out the form, and submit it by 1:00PM on the day of the board meeting

UPDATE: 7/18/20 3:35PM The District's homepage now shows that there is a process for submitting comments for Public Participation.

FoxNews.com carried this headline on July 17.

The FoxNews online reporter went on to explain what a Karen" is - "a pejorative term that has come to prominence to label a demanding, middle-aged white woman who displays a sense of overbearing entitlement in various societal confrontations." A "perjorative term", eh?

It's interesting how fluid the internet is. And why hard-printed copy, such as a printed dictionary, is so important. You can read something today on the internet, and next week you can't find it.

On July 1 I found one definition of a KAREN as a racial slur. Today? Not to be found.

Why was I looking up KAREN today? Lightfoot's slur against the White House press secretary reminded me of the slur tossed by Columbia's own Chris Leevy Johnson in a Facebook post right after James Shadd was elected Chair of the Richland 2 School Board. At 6:37PM on June 30, Johnson, a pastor with Brookland Northeast Baptist Church and a funeral director at Leevy's Funeral Home, referred to Richland 2 Trustee Lindsay Agostini as a "KAREN".He posted a message on his Facebook page just minutes after Shadd was elected, and this post is still there today. 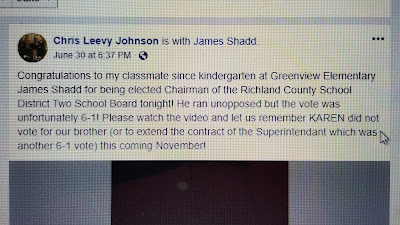 Johnson's post was later sent to James Shadd by Tameika Isaac Devine on June 30 at about 10:30PM, with her message: "Congratulations, James Shadd. Please read Pastor Chris' post below."

Was that Devine's way of saying Thanks to the superintendent for directing the school district's bond attorney firm to give some legal work to Devine's very small law firm? The superintendent got the board to approve his authority to so order Burr Forman McNair in January 2019. My guess is that most board members did not even read or understand that directive sentence in the nine pages of Resolution they were asked to approve.

Why would Johnson be calling Trustee Agostini a "KAREN"? Why would he be calling her anything? Is it a racial slur? Is it appropriate language for a pastor at a large church and a man associated with a large Columbia funeral home, well-known in the black community?

Should he face censure by the church and criticism by Leevy's for his comment?

What Johnson didn't mention was "why" Agostini voted against Shadd for Board Chair and "why" she voted "No" on the superintendent's evaluation and contract extension.
at July 17, 2020 No comments:

Be sure to catch the District's homepage today at www.Richland2.org

The schools' re-opening plan is featured.

The superintendent's photo and mention of his evaluation got the most important position which, for a newspaper or a webpage, is top right. And his photo got the largest size; larger even that the three photo sizes of the board's officers, combined.

The gushing comments of Amelia McKie, trustee-elect of the school board (and unofficial member of the board since November 13, 2018), are almost over-powering. She spoke with the same glowing terms at the board meeting. If she were an employee, you'd think she was looking for a promotion.

The superintendent was awarded an "overall distinguished" evaluation, along with a one-year extension of his employment contract to 6/30/2024.

The District's web article did not mention that the vote on his evaluation and contract was 6-1, not unanimous. The article also did not mention why the vote was 6-1, although the dissenting trustee did speak up and inform the public. Her reason was significant and should have affected the evaluation. But she is in the minority on the board.

The Board majority (the "Squad") will band together and get everything it wants, and it will give the superintendent everything he wants. There are four (sometimes five) who rule the roost. And not just because a majority of four out of seven will control. It's "which" four.

The public, the voters, is entitled to seven independent minds looking carefully at everything it is to control and direct. That hasn't been the case for some time. I wonder sometimes if certain members of the board even bother to read all the material on which they will be expected to vote at a board meeting. There is no reason to think that will change now.

I recall one board meeting when a trustee asked a question of a staff member after a presentation had been made. Somewhat hesitantly, but bravely, that staffer said (something like), "That information is in the board packet that you got before the meeting." Obviously, that trustee had not read the material in the board packet. How often does that happen?
at July 17, 2020 No comments: