WACH-TV Fox/57 reported today on the Governor's possible referral to the S.C. Inspector General to nose around in Richland 2 School District.

I had a good laugh at the final paragraph in the story.

"WACH FOX News asked Richland Two school district leaders about the proposed investigation. They tell us they can’t comment directly on the matter right now, but do say they’re making all parents, faculty and staff aware of what’s expected."

Here's an idea for Richland 2.

MAKE THE SCHOOL BOARD (ESPECIALLY FOUR OF THEM) AWARE OF WHAT'S EXPECTED.

The article quotes Mary Ann Adams, who delivered a powerful statement during public participation on May 24th. “Instead of engaging each other like professional adults, you behave like of popular middle school girls who corner the outcast of the group, and tease and taunt her, out of the sight of others, until she explodes,” said Mary Ann Adams. “Effective leaders attempt to deescalate situations.”

We all know about whom Mrs. Adams was speaking. 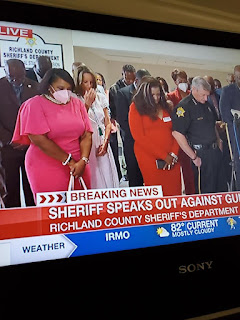 Guess who was front and center when the press conference closed with prayer? Amelia McKie and Teresa Holmes. Manning was in the back row.

Remember Tuesday night, when Holmes stayed away from the school board meeting to, as Manning put it, keep us all safe? What a miraculous recovery from her COVID exposure she had! How nice that she had a complete recovery from her COVID contact and could show up for some TV face time today. And no mask! Where was your mask, Teresa?

Three board members were there: Holmes, McKie, Manning. Was Caution-Parker there?

Look at all those people. Did Holmes tell them of her recent close contact with COVID?

Where were Agostini, McFadden and Scott?

None of those three was informed of this press conference.

Dr. Monica Scott was not told of this presser, and she is the Chair of the Committee of the Whole for Safety & Security.

Trustee Lashonda McFadden did not know about it.

Trustee Lindsay Agostini was not told of it.

How could Teresa Holmes, Amelia McKie and James Manning know about this presser and NOT Dr. Scott or Mrs. McFadden or Mrs. Agostini?

7-year-old with gun at Sandlapper Elem.

Hold onto your hats, pardner.

The cops nabbed a 7-year-old with a gun at Sandlapper Elementary School today. Can you believe this?

Of course, we'll never hear his name. Maybe I should snoop around and ask some questions. I could get it by noon tomorrow.

What kind of gun was it? Was it loaded?

I write "he", but the WACH.com story did not indicate whether the student was a boy or a girl.

At 6:38PM there is no story on thestate.com

WIS-TV reports the gun was loaded but does not report the gender of the student.

I'd say a record was set today in Richland 2 schools.

Don't miss the May 12th article on www.blythewoodonline. org about school board over-spending of its travel allowance. You will want to read it more than once or print it and underline key information and statements.

In addition to reporting over-spending by Monica Scott and Teresa Holmes, Reporter Debra McCown estimated that James Manning will be about $2,000 over his allowance.

Absolutely, the District's Accounts Payable Department never should have over-paid even one board member. It's not a clerk's fault; someone (at least two of them) approved the overage. A clerk would have said, "Hey, this person doesn't have any money left in her (his) allowance."

EACH person who over-spent must repay the District. While it might be nice for a board member who has money left to help out another board member by transferring some of her unspent funds, why should she?

This paragraph in the article ought to stir up readers: "Also, at one point, she (Monica Scott) says, Davis (the superintendent) abruptly canceled board members’ registration to a conference in a knee- jerk reaction to a comment made by someone associated with the event – and later re-registered them, but at twice the cost because early booking discounts no longer applied."

And this paragraph in the story? "Davis, in a recent school board meeting, said he assumed board members were tracking their own expenditures – and that’s why the administration continued to approve travel that exceeded the budgeted amounts."

Just because his "assumption" was incorrect is no reason whatsoever for the Accounts Payable Department to overpay a board member! Aren't there any accounting controls in place?

As for Holmes, the newspaper's story continues: "Holmes did not respond to an email Monday seeking comment. Her statement at the April 26 meeting, however, sought to blame her overspending on the pandemic.

"Obviously we have just come out of Covid, and every travel that we have taken, those people that have traveled, has been extra expensive for Covid,” Holmes said, “so there are a lot of people who did not keep up with the budget.”

Huh? Is that a statement by a person with a doctorate? With 35 (or is it more) years in the field of education? That's one of the dumbest statements I've seen from her.

The public should demand proof that those board members who over-spent have repaid the excess.

How will the superintendent's lack of management and over-sight here affect his Annual Evaluation?

Thanks to a tip from a reader, I inquired about this.

The response from the District was, "As a culminating activity for this year’s Premier 100 retention efforts, some of the male educators of color who work in Richland Two will take a day trip to St. Helena Island to tour the Penn Center."

That response prompted several questions in my mind.

How many employees will attend?

Are those who attend being compensated?

Who pays for it?

What is the budget for the event?

Does the District provide transportation? School bus? Chartered motorcoach? More than one?

What retention effort is there for female teachers?

What retention effort is there for white male teachers?

When is the Board either going to make this part of the superintendent's job description and evaluate him on it, or direct him to shut it down?

Why isn't the Premier 100 Men-of-Color program considered race-based and discriminatory?

Can OIG investigate Richland 2? (not yet)

Media are reporting that Gov. McMaster may ask Brian Lamkin, Inspector General for the State of South Carolina, to investigate the Richland 2 School District because of the chaos (my word) that has become so public.

I welcome such an investigation.

However, in reading the OIG's webpages and, in particular, the section "File a Complaint" this message is prominent.

This is why the passage and signing of S.202 is so important. It will broaded the powers of the Inspector General. Urge your state legislators to complete work on S.202 and pass it without delay. The Bill is in Conference Committee now (House: Bernstein (D), Caskey (R), Collins (R); Senate: Hembree (R), Young (R), Hutto(D))

Complaints we can investigate.

Where we can help:

The Inspector General can only investigate allegations of fraud, waste, abuse, mismanagement, misconduct, or wrongdoing involving South Carolina State government agencies and their employees in the Executive Branch of State Government (includes public colleges and universities).

OK, so what does Gov. McMaster know that the I.G. doesn't know.

Will the OIG be able to investigate Teresa Holmes and Amelia Mckie for not even being legitimate members of the school board?

\For acting as officers of the school board? McKie for her $57,000 debt to the South Carolina Ethics Commission?

Holmes for failing to open an investigation into the January 25, 2022 boardroom incident?

Holmes, Baron Davis and Claxton for refusing my request to attend the hearing of my grievance against the superintendent?

Holmes and B. Davis for refusing to address my complaint about the improper expansion of AR KI-R in my Trespass Notice to apply to ALL Richland 2 properties and not just R2i2?