Have you tried to view the November 16th video-recording of the board meeting? Would you normally look for it at livestream.com/richland2?

Here's what you'll find there: 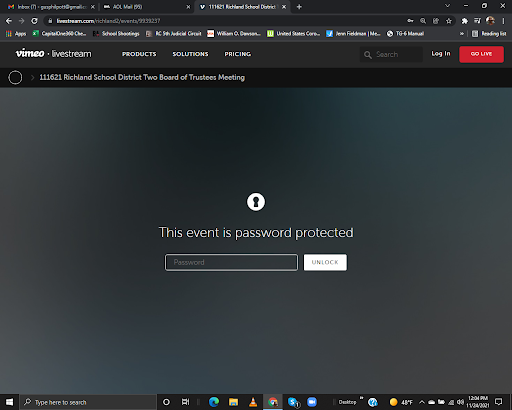 Now what do you do?
You might look next on the District's website. In fact, not only is the video-recording not there, the agenda is not shown on the page of meeting recordings and notes.

Then, if you are like I am, you write to the Richland 2 office and ask where it is. Imagine if 28,000 students write or 25,000 parents write. That would create a huge workload on someone, wouldn't it?

Here's the reply to my inquiry on Monday:

"Below is an explanation for why that video is password protection [sic]. This explanation is posted on the live stream page on the district's website:

" *A note about the recording of the November 16, 2021 Board Meeting: While the investigation involving the minor has been concluded with no charges being filed, the availability of the livestream video from the meeting will remain restricted. A recording of the meeting with an approximately three minute portion of Public Participation removed is posted on the district's YouTube channel. Click here to access that recording. The livestream video is restricted and the version on YouTube is edited as the District is generally prohibited from releasing personally identifiable information about students pursuant to a federal law known as the Family Educational Rights and Privacy Act ("FERPA")."
And here's my question to you. Would you ever have found that page on your own? Would you even know to begin looking for it?
If the wizards at Richland 2 put themselves in your shoes, wouldn't they put that message on the "Password Protected" page? Or wouldn't they put at least a link on that page that you could click and then see the "note".
Personally, I believe that Richland 2 is violating the FOIA law by restricting the original video of the meeting and failing to publish it in its entirety. The District is hiding behind FERPA, when it doesn't apply. FERPA would apply if I tried to get personal information about a student from the District.
The recording of the public meeting is just that - a recording of a public meeting. Whatever was said at that meeting, by anyone at that meeting, was said in public.
The father's name was announced by the board chair as the next speaker. He would have known that the public meeting was recorded. The entire recording should be published, not an edited version.
at November 24, 2021 No comments: