Musical Chairs on the Board

No surprise at tonight's election of board officers for the 2022-2023 School Year.
Manning was elected Chair.
McKie was elected Vice-Chair.
Holmes was elected Secretary.
So the Board continues to have two officers who aren't even legal board members.
I hope the State Inspector General will have fun with this.
The Chair and the Secretary could change in November, if Richland 2 decides to begin complying with State law. South Carolina Code of Laws Section 59-19-70 will probably be new information to Richland 2, just as finding out when the term of a school board member actually began, which Richland 2 learned in 2020.
SECTION 59-19-70. Chairman and clerk of board.
The trustees shall, as soon as practicable after the appointment of any new trustee, organize by the election of one of their members as chairman and another as clerk of the board. The chairman shall preside at meetings of the board and perform other duties imposed on him under the law, and the clerk shall keep a record of the proceedings of all meetings in a book provided for that purpose and perform all other duties required of him by law.
Trustees Agostini, Scott and McFadden were wise just to sit out the election. Their votes weren't going to count, anyway.
at June 28, 2022 No comments:

Board (majority) refuses to support one of the Minor Three

The Core Four stuck together tonight in the final board meeting of the 2021-2022 school year. But the tide will change in November, and the Core Four (what's left of them) will learn what it's like to be on the losing end of every vote.
Trustee Agostini wanted to amend the agenda for July 12th board meeting to include a discussion of Board Policy JKE - Expulsion of  Students and its related Administrative Rule.
AR JKE-R was issued in 1996 and was last revised March 22, 2010 - more than 12 years ago.
Manning did a good job of sabotaging the motion by wanting to know more about it, so that it would look like he had an excuse for voting against it.
He and the others would have guessed why the Minor Three might want to discuss that policy in public. At a recent board meeting there was an intense discussion about whether a student up for expulsion should have the right to be heard by the board, which presently just takes the superintendent's word for whether a student should be kicked out.
The vote was, of course, 3-4, and Agostini's Motion failed.
The superintendent said board members can discuss issues with him. Well, they know how well that has worked out during the past year.
As has been said at previous board meetings, when one trustee brings up a request, the other board members should support it. Why not put it on the agenda? Then, if they want to kill it, they can kill it after discussion, not kill it when the Motion is made.
But that's the way The Core Four operates.
at June 28, 2022 No comments: 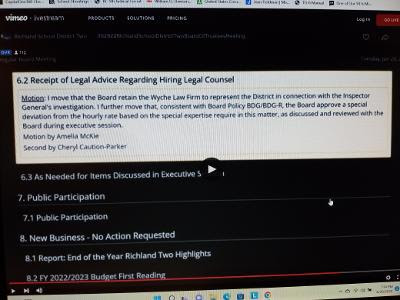 Tonight was one of the worst examples of Parliamentary abuse by Teresa Holmes that has occurred in the entire School Year of 2021-2022. And it was on a very important issue.

The Board discussed in executive session the hiring of special counsel to represent the District in the face of likely legal action by the State Inspector General.

When it was time to vote on hiring special counsel, three board members (Trustees Scott, MdFadden and Agostini) commented that they had received information only 30 minutes prior and had not had time to examine it carefully.

Agostini wanted to hear from the District's lawyer, who was present in the audience. McFadden wanted to know why they were presented with only one law firm, The Wyche Law Firm. The motion included a deviation of the District's hourly rate, but McFadden and Agostini were unsuccessful in getting that information for the public.

Teresa Holmes was 100% wrong when she told Trustee McFadden that, if the motion failed, she could make a secondary motion. No, you make a new motion.

But one of the trustees should have made a secondary motion during discussion.

Teresa rushed through and shut off discussion by calling for the vote.

All of the trustees, but especially the three in the minority, should know Robert's Rules of Order. When the Chair is wrong, they should know what RONR says and demand that RONR be followed.

It's simple. You study RONR. The magic words are Point-of-Order. But you have to know what to do, when the Chair ignores the call of Point-of-Order or when she overrides it. RONR provides specific guidance.

Tonight Teresa Holmes was a bully, and she got away with it.

Maybe because they are spending your money, not their own?

After a year of running board meetings, Teresa Holmes blew it, when she attempted to convene her finally school board meeting as Board Chair.

Teresa Holmes: "Good evening. May I please have a motion to call to order the June 28, 2022 Richland 2, Richland School District Two school board meeting. May I have a motion please to go into executive session? Ms. McKie."

What in the world was that mess of words?

So she never really called the meeting to order.