For the Board: Do This Now 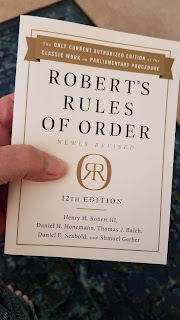 Understanding that it's hard to get members of a public body (ex., a school board) together for a meeting or a workshop, I recommend the following online course to the seven members of the Richland 2 school board.
If they got together in-person with a live training, there would have to be Notice of a meeting, and it would have to be open to the public. Some members would be "politically correct" and choose "nice" words, rather than being totally honest, if a workshop were held in public. Then some feelings will get hurt. And then, Look Out!
So, instead of a workshop on a Saturday and its attendant expenses, I urge the seven members to register for this online course by Ann G. Macfarlane titled Take Control of Your Meetings Using Robert's Rules. It'll cost the District $179 x 7, or $1,253. All should enroll, and they should agree on a certain minimum pace of completion. There are 16 short lessons; less than two hours in total time.
Click on the course title for more information.
From the website comes this information, if you are not going to look for more detail.

"This self-paced online course will equip you to run controlled, fair and democratic meetings using four fundamental guidelines. After taking this course, you will be able to:

It's time for order in the meetings. After each board member completes the online training, having paid attention, taken good notes, and recorded questions, then the board ought to get Robert's Rules of Order expert, Attorney Helen McFadden, back for an in-person workshop.
at October 17, 2021 No comments:

Four members of the U.S. Civil Rights Commission, including Columbia's Stephen Gilchrist, have penned a letter to U.S. Attorney General Merrick Garland about his Memo regarding protesting parents and domestic terrorists.

The four wrote as members of the Commission and not on behalf of the Commission. That's an important distinction, when one is a member of a recognized commission, entity, or even something like a public body (such as a school board).

Click on the headline to read the article. The letter to AG Garland is embedded in a link in the first paragraph of that article.

You can go directly to the letter by clicking here.

This is a powerful letter on behalf of parents who are trying to make a point with school board members. Speech, even forceful speech, is not terrorism. Parents should not have to worry about a knock on the door at midnight after they have attended a school board meeting.

Share this blogpost and/or the FoxNews article and/or the letter itself with people and groups.

Email this blogpost to friends, colleagues, neighbors by clicking on the email icon at the bottom of this post. I do not see the email address you enter, and I know of no record kept of your sharing it or who receives it.

Why Are Deputies at School Board Meetings

Why does Richland 2 contract with the Richland County Sheriff's Department to have so many deputies present at every school board meeting?

Can anyone remember a time when they were needed in a hurry? Even one? I can't, and I've been attending meetings since February 2018.

On October 12th two deputies were at the entrance and prevented one parent from entering the building because he was not wearing a mask.

Let me say, right up front, that I am on a friendly basis with the deputies who get stuck with Richland 2 school board meeting duty. They are good guys. And they handled the situation well on October 12 by not arresting the man who wanted to enter. Apparently, the District wanted him to be issued a Trespassing citation.

No crime was being committed. They knew that, and that's why no arrest was made.

The deputies are stuck between a rock and a hard place. Somebody told them to be at that door. Who? Did a Richland 2 administrator give them the order? Or did their superior officers at RCSD tell them to do whatever they were told to do (by school officials)?

"Deputies will not enforce any rules and regulations set up by the employer [sic] that is [sic] not otherwise violations of the law." (RCSD could use a little help with content and grammar.)

The mask mandate is a Richland 2 rule or regulation created by the superintendent. It is not a law. There is no mask mandate state law.

There is, however, an ordinance (law) created by the Richland County Council. But the Fire Marshals are to enforce it, and the fine for violating it is $25.00.

After the meeting deputies seemed to be in a hurry to clear the audience out of the board room. Anyone else notice that?

I am writing to Sheriff Lott to ask him to get a legal opinion as to whether RCSD deputies can be used at the front door to keep people out or if they can be used inside the board room to usher the audience out or even prevent a member of the audience from approaching a board member after the meeting.

In the past I've been told that I cannot approach a board member after the meeting ends, because the meeting is over. That's wrong. It's a public meeting room. If public officials are there, most of them invite the public to say hello and ask questions or make comments.

The armed law-enforcement officers of RCSD are not private security guards for Richland 2. Their only function at meetings should be Law Enforcement; i.e., to keep the peace, prevent crimes, take action if crimes are occurring or are about to occur. They should not be there to block doorways or screen people entering or rush the public out of a meeting room.

If I had one of those clicker counter-things, I'd try to count the number of times Holmes banged that gavel on her desk at the October 12 school board meeting. Maybe I'll get one.

Any guesses, readers? Put your guess in the Comment section below.

During one of her outbursts, she banged the gavel so loudly and so many times that I exclaimed that it hurt my ears.

But here's the point. By rapping that gavel so hard, did she damage the desk? Wish I had thought to look at its surface after the meeting.

If there is damage to the desk, should Holmes be charged with destruction of school property?

There certainly were plenty of witnesses!

Why was Holmes maskless? 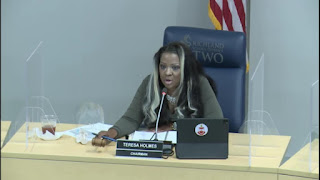 Why was Teresa Holmes maskless for so much of the October 12th school board meeting?

The superintendent has imposed a mask mandate in the schools. The trustees were wearing their masks. Trustee-elect McKie was wearing her mask. The superintendent and staff wore theirs. The audience, if it wanted to enter R2i2, had to mask up.

Holmes won't wear a mask, anyway. How many times during the meeting did she remove her face shield (seen in the photo on the desk to her right)?

Suggestion: On October 25th (the day before the next board meeting) send an email to all the board members, including trustees-elect Holmes and McKie, and ask them to monitor Holmes. If she takes off the shield other than to blow her nose, request them to ask Holmes immediately to put it back on.

After all, they are there "for the children". Just ask Caution-Parker or even Holmes herself.

By the way, Holmes should probably overcome her vanity and get some glasses. Notice how she has trouble reading words on a sheet of paper at arm's length?