NOTE: This post was written on Wed., March 23, and held, as I intended to insert links to the comments made by two speakers. The District appears to have eliminated the option of selecting specific portions of the recording. The links now are to the livestream.com/richland2 recording and it will be necessary to move the timer bar to the time shown. (3/24/2022)

Last night's school board meeting ran, from start to finish, for FOUR (4) hours 26 minutes. What in the world is wrong with the Board leadership (or lack thereof)?

I stuck it out through Item 8.3 (revision to Board Policy KE) and then bailed out, only to return later during the board and superintendent comments.

Why won't Holmes tell McKie to just introduce the Inspirational Moment? A good introduction would be about 30 seconds. Is McKie practicing her Toastmasters' skills and preparing to host the next Academy Awards? Sheesh! Just introduce the speaker! A good introduction would have been, "Tonight's inspirational moment will be presented by Jaiden Bostic, a 5th Grade student at Round Top Elementary." To hear McKie tell it, Jaiden is an "award-winning actor". Seriously? "Published author". Seriously? And calling a 10-year-old "sir"? What nonsense!

And who set up Jaiden? He is an accomplished student, but did he write his entire act? Two-three minutes of inspiration would have been sufficient, rather than the commercials for his website, book and book-signing. livestream.com/richland2 (1:07.19)

Holmes had already thanked Jaiden, in her overly-gushing manner, and then McKie delayed the Pledge of Allegiance with her own unnecessary comments. And referring to him as "Mr. Bostic"? Dumb. Absolutely dumb! I'll tell you - November won't come soon enough for Richland 2!!!

Question for Holmes? After a Motion is seconded, she calls for discussion. When there is none, she says, "Seeing none ..." and calls for the vote. How does one see discussion? How about "hearing none...", Teresa?

There were only three speakers last night. Holmes couldn't even read the first speaker's name correctly. Manuel Cabrera. She read his first name as Marvin. If she needs glasses, Teresa should get over her vanity and wear them! Is it carelessness? uncaring? or just plain disrespect on her part?

Perhaps I should start referring to "Theresa Homes". Would she even notice?

Somebody should explain to Mr. Cabrera that it is not the District's responsibility to provide a safe walking route through his neighborhood. Buses? Yes, maybe. Sidewalks or path through the woods? No.

Joe Trapp and Larry Smalls spoke on the topic on the agenda item, Board Police KE. Listen to them here:

The Core Four had their minds made up on KE, but thanks to Joe and Larry for speaking up and trying to remind the The Core Four that the Public is still present and accounted for.

Something has changed in the past two weeks! Through the date of the previous board meeting, it was possible to watch the YouTube version of the meeting video and snag out a segment, using a webtool called Vibby. This allowed copying a portion of the meeting, such as the remarks of a speaker during Public Participation, and placing a link in a webpost or blog.

This allowed me (and others) to write: "Look at this" and all the reader would have to do is click on the link. The link would take the viewer directly to that portion of the meeting video.

And now? Look what shows up when the District's video link is pasted into the Vibby webtool. 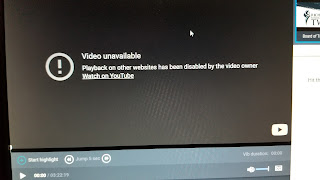 An email will be on the way this afternoon to Richland 2 to ask if they placed that restriction and, if so, why?