At last night's school board meeting, Trustee Agostini made a motion to postpone the Dress Code item on the agenda until the August 23rd meeting. This was at the beginning of the meeting when the Agenda was up for approval.
Her explanation? Teachers had contacted her with concerns.
She probably knew her motion was doomed from the start. And, sure enough, it failed on a 3-4 vote. Guess who The Four were.
The next motion was to pass the agenda as presented, and that passed 4-3. Guess who The Four were.
And the killer comment of the discussion?
The supt. said that he had not heard from any teachers with concerns about the Dress Code.
First of all, no comment from him was needed at all. He is not on the board. And he (the head of Administration) was behind the revision to the Dress Code. The revisions show the full-Woke position of the District, confirmed by The Core Four.
Secondly, of course he hasn't heard from any teachers. What teacher, in his right mind, would jump the chain-of-command and dare to express himself directly to the superintendent?
That teacher would be drawn and quartered for insubordination and have a request sent to the S.C. Dept. of Education to have his teaching certificate revoked.
at August 10, 2022 No comments: 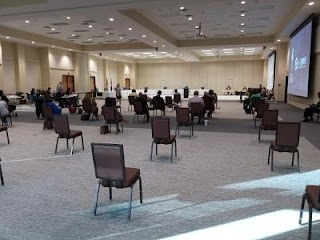 Take a good look at the seating arrangement for last night's school board meeting.

Way, way far away (in the picture) are the white-clothed tables blocking the board desks. You can almost see them from the back of the room.

Staff is seated now to the left side of the room, instead of running interference between the public and the board.

Seating is still arranged at COVID's "social distancing". Last night the first two rows were set up for special guests. I left before they were recognized.

What does that seating arrangement say to me?

That the board doesn't give two hoots for the public. "Put 'em in the back where we can more easily ignore them.

Speaking of ignore, during the full three minutes that I spoke last night, Amelia McKie did not look up once from her furious writing. Is she writing her memoirs and trying to finish them before her Ethics Commission hearing on October 20 or her term-of-office expires in November?