Too much month left at the end of the money?

What would Cheryl Caution-Parker say to this explanation of family money management? Her answer would probably be: "Tough."

She frequently speaks of her 40 years in Richland 2. Did she ever teach any courses that students would use for life?

I don't know the source of this. I snagged it from Facebook.

Have you been wondering why is seems to be harder and harder to make ends meet? 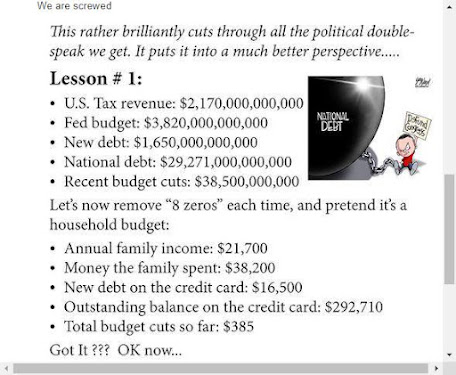 Does your family budget look like this?
These are lessons that Richland 2 students need to learn.
at October 18, 2021 No comments:

If you wish to address the school board at a Regular Meeting (not a Special-Called Meeting or Workshop), you must arrive early and sign up on two sheets of paper. The usual deadline is 15 minutes before the start of the reconvened public session (after the executive session).
Recently, the sign-up sheet vanished 45 minutes before the starting time. That got corrected.
On October 12 ten speakers had signed up and the sheet was removed before the 15-minute deadline. A couple from Blythewood arrived before the deadline, and the man wanted to sign up. I helped him find the staffer with the sheet, but he was refused because there were already ten names on the list.
Because the announced plan on the agenda is for five people to speak during the first Public Participation segment and five to speak during the second segment, I suggested that the man be allowed to sign up as Number 11.
My reasoning? If one of the registerd speakers left the meeting early, then No. 11 would move up and could speak.
Nope. There are Rules. Only ten can sign up.
I couldn't help wondering - if someone else had suggested that, would the suggestion have been accepted?
As it happened, the board allowed all ten to speak during the first Public Participation segment on October 12. I thanked them for that courtesy as I began my own remarks.
What do you think? Good idea? Email the board and tell them what you think.
at October 18, 2021 No comments: