Chaos Again! RONR - out the window!!!

Did you hear that big, ol', black steam engine roar through the boardroom tonight?

There are new Rules of Order for the Richland 2 school board. They aren't available in print yet, but the title will be Holmes' Rules of Order. Basically, they will be, "I'm Holmes, and I rule this joint."

Business fell apart during the portion of meeting devoted to student appeals.

When Student #5's fate was to be determined, Manning made a Motion to deny the in-person appeal.

Listen to this portion of the meeting. Go to livestream.com/richland2 and fast-forward to 1:24:15 for the start of the discussion about Student #5.

Trustees Agostini and Scott spoke in favor of hearing from the student in person. While just about every sane person would agree that a person ought to have the right to confront his accusers, that isn't the way the (majority of the) Richland 2 school board works. Trustee Scott stated that the board is the "stewards of the people" and that everyone deserves the oppotunity to be heard.

[I'll bet that includes Gary Ginn and me. We both requested in-person hearings on our No-Trespass Orders and were denied them.]

McKie went on record that the board should not hear an appeal due to the severity of the case. (Was this one of the guns-at-school cases?)

The vote was called. 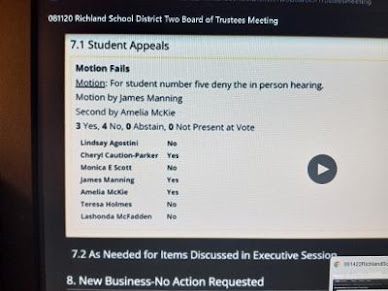 I expected the vote to be 4-3. HOWEVER, the vote was 3-4, with Holmes voting with Agostini, Scott and McFadden. Therefore, Motions Fails.. Imagine that! Holmes voted AGAINST her buddies, and against the Motion to deny the appeal. How did that happen?

Then Trustee Scott made a Motion to hear the case of the parent/student (#5), and Agostini seconded. Manning said there are certain cases that are so severe (that there was no point in granting a hearing). In other words, Guilty; no chance to prove innocence. (My words). Scott said everybody should have the chance to be heard. McFadden said the board should hear the "whole, entire story".

Holmes announced she was going to take a "point of privilege", which was unnecessary to state, because it was her turn to speak. She said there is a "legal law" (whatever that is) that has to happen.

Holmes said, "I am open to hearing cases if we have leeway." RIGHT THERE IS A LIE. The board had leeway with Gary Ginn's grievance and with my grievance. Did we get hearings? NO.

So, Holmes' position seems to be, if a person is charged with Murder, he should be convicted. No need to have a trial.

At this point (1:30:48) Trustee Agostini asked Miss Lewis (Christine Lewis, the board's secretary and the recording secretary for the school board meeting) to read back the vote, saying that Holmes had voted AGAINST denying the in-person hearing; i.e., if not AGAINST it, then she was FOR it (the in-person hearing).

Holmes woke up and realized that she had voted the wrong way. Said she, "I must have hit the wrong button." Yes, indeed she had. And her vote was cast and announced by the recording secretary, by displaying it to the public. Holmes pointed her finger at Christine Lewis and said, "You cann change my vote."

No, the secretary CANNOT change Holmes' vote!!! Robert's Rules of Order is very clear about this at Section 4:42: "... a member has the right to change his vote up to the time the result is announced. After that, he can make the change only by unanimous permission of the assembly."

Well, you can't just do that. Holmes did that a few months ago. Unfortunately, the trustees are not highly educated about the finer points of Robert's Rules of Order, but at least this time they stopped her.

Manning bailed Holmes out with some "clarity" about fixing the problem without changing her vote.

Teresa tried to excuse her mistake, but she said a second time that she pushed the wrong button. NO, SHE DID NOT PUSH THE WRONG BUTTON. She cast a "No" vote. CARELESSLY, because - well, you fill in the blank here.

The Motion was to hear the in-person hearing. (Whew! Some wording!!!) The vote was 3-4, as expected. The Core Four stuck together - again.

Then Manning made a Motion to deny the in-person hearing for Student #5.

I believe there is something in RONR that you can't vote a second time on the same motion.

Earlier Holmes had made a comment about certain trustees' "playing", and Agostini expressed that she was troubled by such a comment.

What they are calling "the law" is Board Policy, and Trustee Scott said the superintendent or the Board can make a different decision and over-ride the wording in Policy. Board Policy is not "law".

Listen to Holmes' rudely cut off Trustee Scott and allow Caution-Parker to speak.

Caution-Parker deserved a time-out or to be removed from the board for violating rules of decorum and civility.

McKie said she wasn't sure "what four people" were being referred to. Of course, she is sure. "The Four" are Holmes, McKie, Caution-Parker and Manning. She apparently has no clue as to how foolish she sounds, when she says "I'm not sure..."

Trustee McFadden was trying to be heard. Trustee Agostini called for the vote. At this point the person who made the Motion should have been asked to re-state it. The motion by Manning was to deny the in person hearing for student five. The vote was 4-3; Pass. Holmes found the right button (for her) this time.

Where was the sound when the Richland 2 school board meeting was called to order?
It looked to me like Teresa forgot to turn on her microphone. Did anyone else see the red light on her microphone that indicates it is on?
There was no chaos when the meeting was called to order but the public, as well as all board members, are entitled to hear everything said during the meeting.
at June 14, 2022 No comments: