Watch this mom in action

Check out this mom in Birmingham, when she goes after the school board over its mask mandate.

She has done her homework, and she is well-prepared and well-spoken.

She asserts that a mask is a medical device and quotes law in her state. She is obviously aware of the time-limit for her remarks, and she keeps going as she disregards applause from the audience.

Listen to her remarks. 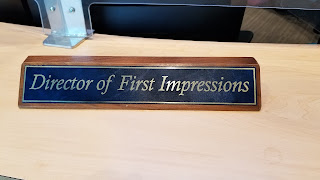 Imagine my surprise last week when I approached the visitor desk at R2i2 and spotted this name-plate.

What was my first impression? "What the heck is that?" My tax dollars at work, eh?

When did the school board approve a "Director" employment slot at R2i2? Where does a Director fit in the hierarchy of administrators? Above greeter? Above department head? Above manager? Above assistant principal and principal?

Is Director even above Commissioner?

If I were to stroll up to the visitor desk, struggle to understand and be understood through the plexiglass windscreen protecting me from the employee seated behind it, and maybe not be greeted with a super-friendly and welcoming smile and words, what kind of "first impression" would the District be making on me?

Whose brainchild was that nameplate?

... you have to wait until at least Tuesday to learn its ruling on the Richland 2 lawsuit. Actually, the Supreme Court didn't "say" anything. It just did not announce a ruling yet. When it does, it'll be all over Columbia news.

Do you have an opinion about the performance of the lawyers?

Did you watch the Supreme Court hearing on August 31? If you didn't and want to, click here.

"1.108. (SDE: Mask Mandate Prohibition): No school district, or any of its schools, may use any funds appropriated or authorized pursuant to this act to require that its students and/or employees wear a facemask at any of its education facilities. This prohibition extends to the announcement or enforcement of any such policy."

Do you understand it? Are you misled by "SDE: Mask Mandate Prohibition"?

Do you realize that the Proviso does not tell a school district that it cannot mandate masks?

Parents, you'd better get on top of Richland 2's plans for re-drawing school attendance boundaries.
Read this article in today's Post and Courier.
Is it correct? Does it make sense? The article says that Richland 2 school board will vote on October 26 on changing attendance boundaries. Are you in touch with Administration? With school board trustees? Will the two trustees-elect, who aren't legitimate board members, be allowed to vote? (You can count on it.)
Here's what doesn't make sense to me in the article.
Bethel-Hanberry Elementary in Blythewood is 120 students over capacity.
Langford Elementary is 250 students under capacity. The schools are two miles apart.
It looks like 270 students would be moved out of Bethel-Hanberry.
The article reports that over 3,000 students could be affected, including students of Round Top Elementary. That's more than 10% of the District's enrollment.
Board meetings are scheduled for September 14, September 28, October 12, and October 26. No doubt there will be other meetings. The agenda for each meeting will be published and can be read on the District's website at least 24 hours before the start of the meeting and often 2-3 days before the meeting.
Read carefully for the deadline to sign up to speak at meetings. For the August 24th meeting the deadline was an inconsiderate FORTY-FIVE (45) minutes before the start of the meeting. Hopefully, the Board and Administration will come to their senses before the September 14th meeting and change the sign-up deadline to 10-15 minutes before the meeting.
It doesn't even have to be that short a deadline. There is no reason a parent or community member couldn't sign up even after the meeting starts and then be allowed to speak during the second Public Participation segment.
at September 05, 2021 No comments: