At last night's school board meeting five members of the public addressed the board in the first segment of Public Participation.

(18:05 on the video timer) The first speaker was a female student from Spring Valley High School. She spoke in a confident, well-organized presentation.

(21:45) The next speaker was a male student, also (I think) from Spring Valley. He tore into the board about use of low-skilled substitutes in his AP class. I'll have to listen to both comments again, as soon as the video is published.

The third (25:22) and fourth (28:59) speakers also ripped the Administration over lack of accommodations for at-risk teachers.

They were cut off abruptly by Acting Chair Holmes, who was keeping a sharp eye on the timer. Her abrupt, loudly-spoken interruption of "THANK YOU" must have been shocking to the parent speaker and also was to me in the audience.

If only the moderators in the Presidential debates had had Holmes for a tutor!

Trustee Elkins asked Holmes, very politely and professionally, to allow speakers to at least finish their sentences. Holmes acted like she'd be committing a Federal felony if she let a speaker go one second past the allotted three minutes.

Holmes threw on her superiority tone at Elkins and shut down further discussion.

The problem was that the timer was behind the speakers. The board and the audience could see the timer winding down, but the speaker was facing away from the timer. Unless he had eyes in the back of his head, he would not realize he was running out of time.

BE SURE TO VIEW ALL FIVE SPEAKERS, when the video is published on YouTube. Each of the five speakers did a great job.

(33:07) The sixth speaker spoke with a heavy accent. It was difficult to understand everything he said. At one point, Holmes leaned toward the superintendent to comment, diverting her attention away from the speaker.

Her doing so was disrespectful to the speaker and also against meeting procedures for members of public bodies. Everything said by a board member should be audible to every other board member and to the public. Side-conversations are not to be conducted.

Last night, November 10, 2020, the Richland 2 School Board conducted a Regular Meeting, including an Executive Session, without having a quorum present.

Trustee-elect Lashonda McFadden was sworn in, but her term-of-office does not begin until November 16.

Trustee-elect McKie was present and seated at the board, but she is not a legitimate member of the board because she has never taken the oath-of-office legally.

Trustees Agostini, Elkins, Manning and Caution-Parker were present. They were the only legitimate board members present last night. That's four. A quorum is five. The meeting should not have been held last night.

At last night's School Board meeting, the board was set to cause a newly-elected trustee to join the board before the legal beginning date of her term-of-office.

On Monday I wrote an email to all trustees, trustees-elect, the District's attorney, the District's Robert's Rules of Order consultant, the sheriff, the attorney general, and others, asking the District to follow S.C. Code of Laws 59-19-315.

S.C. CODE OF LAWS SECTION 59-19-315. Commencement of trustee's term of office.The term of office of every elected trustee of a school district must commence one week following the certification of his election.

Supt. Davis explained to the public that the District had misinterpreted the law since 2010. After a "concerned citizen" raised the issue, the District got legal advice and will follow the law.

Mrs. McFadden was sworn in last night by Columbia Mayor Benjamin, and her term-of-office begins on Friday, November 16, 2020.

This is what the conference room on the second level of R2i2 looked like. The board was waaaayyyyy down at one end of the room, and visitors were seated at the other, socially-distanced. 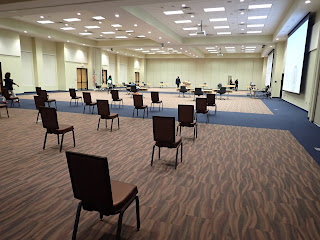