At the August 13 school board meeting, the one speaker during the Public Participation segment was Coach Lawrence Terry, a Richland 2 employee at Richland Northeast High. You can view his comments on the YouTube recording for August 13, 2019, at 20:20 on the timer. 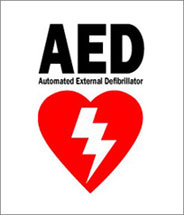 Coach Terry suffered sudden cardiac arrest last year and mentioned a student who also suffered such a heart event, although the student was not on campus at the time. He spoke about the need for the equipment to be available where their use might suddenly be called for, such as on a sports field. If the AED is hanging on the wall somewhere back in a building, too much time might elapse before it could be found and brought to a victim on a field. He also referenced cold tubs to treat those who become over-heated and the ice required for the tub.

Of course, who would expect a member of the track team or football team out in 100º to become overheated or have a heart event???

No employee of Richland 2 should sign any document that reads that he has received adequate training in First Aid, CPR or use of an AED, if he has not received that training.

Don't stick your neck out. If you sign it and you haven't received the training, guess who will be hung out to dry when the truth comes out?

If you are expected to hold a Certification, then get the training, and get enough of it to be competent to administer aid.

Parents: ask where the AEDs are, how many there are, and how many Certificated employees know how to use them. Ask about First Aid. Ask about CPR training.

If the First Aid kits are depleted, send a written request to your Supervisor and request re-stocking. And then follow up. New supplies should be in place within a week. There is no reason for it to take longer.

Ask the Principal of your kids' schools to sponsor First Aid and CPR training and training for using an AED. And what to do if someone is choking. Can you perform the Heimlich Maneuver safely?
at August 15, 2019 No comments:

At the August 13, 2019 Regular Meeting of the school board, the board voted 7-0 to award an "Overall  Distinguished" evaluation to Supt. Davis.

Then they moved on to a Motion related to the superintendent's employment contract. Go to YouTube and watch this portion of the meeting, which starts at 26:00 on the timer.

As read by Trustee Caution-Parker the Motion included terms "reviewed and discussed" in executive session for a two-year contract extension (to June 30, 2023), a 12.3% increase in his annual salary, an additional 2.5% increase in his annuity, and a simple majority vote of the board for actions pursuant to Section 11D of the contract. The motion was seconded by Trustee Shadd.

Section 11D was not explained.

The discussion of the Motion was quite interesting. First, Trustee Elkins-Johnson commented. She stated that she would not support the new contract for one reason - the Board was not allowed an opportunity to discuss the matter. She stated that the Board Chair (James Manning) had telephoned each board member to poll them. She supported many provisions in the renewal contract, but she said the board was not allowed to pull one item out. She objected to the "Super Majority" provision in the contract renewal, on which she did not elaborate.

Trustee-elect Holmes (who actually should not be at the board table and should not have had access to the contract or the executive session, because she has never taken the oath of office legally to become a full-fledged board member) stated that she would support the contract renewal, but she too did not like the Super Majority condition. She too said that the board could not pull that one provision out for discussion.

But at the open session, a board member could have made a motion to pull that section out of the contract for discussion. The vote might have passed 4-3, or it might have failed 3-4. My guess is that it would have failed.

Holmes went on to say that the board decides by majority vote (4/7) on every other issue, and she did not agree with the requirement of a Super Majority (5/7) to remove the superintendent. She added that she was not planning to seek his removal. But her objection was not strong enough to cause her to vote No on the contract renewal.

Holmes said she would support the contract (YouTube @29:15), "because the majority actually ruled on this..."

WAIT JUST ONE MINUTE. When did the majority "rule" on that? What did she mean by "rule"? Did they take a vote in Executive Session?

Trustee Agostini made the final comment on the contract renewal. She stated two reasons for not being able to support the new contract for the superintendent. Her first reason was the requirement of a Super Majority vote to oust the superintendent, should that concern arise. Her second reason was concern about setting precedence "with such a large salary increase."

Board Chair Manning explained for the public that the board did have the opportunity to discuss the contract in Executive Session on more than one occasion "before coming to the final decision."

The vote on the Motion to approve the renewal contract for Supt. Davis was 5-2 ("No" votes by Elkins-Johnson and Agostini).

Section 11D was not explained publicly.

Was there a violation of the South Carolina Freedom of Information Act?

South Carolina's Freedom of Information Act is found in Title 30, Chapter 4, Section 30-4-70 (b) which reads, in part, "No action may be taken in executive session except to (a) adjourn or (b) return to public session. The members of a public body may not commit the public body to a course of action by a polling of members in executive session.
(c) No chance meeting, social meeting, or electronic communication may be used in circumvention of the spirit of requirements of this chapter to act upon a matter over which the public body has supervision, control, jurisdiction, or advisory power.

What did Chair Manning mean when he said, "the board did have the opportunity to discuss the contract in Executive Session on more than one occasion 'before coming to the final decision'."

Did the polling of the board members on the topic of the superintendent's contract constitute a violation of the Freedom of Information Act? Could his calls to each board member be construed as the prohibited "electronic communication"?