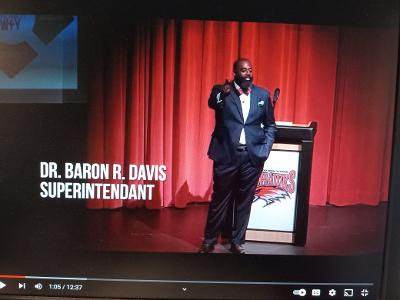 There is no "A" in Superintendent. A "Premier" school district. Right? And Richland 2 can't spell "Superintendent"?

The District had from August 9th to August 19th to review that video and correct it, while it withheld it from the public. Or was it embedded on August 9 as the superintendent spoke?

Well, is there any reason it should not be? There he stands. At a podium. In front of a red curtain. To the side of a projected image on a screen that cries out

Referring to the logo of the Richland 2 flame, "2. That logo is under attack."

Didn't anyone proof the video?

Listen to his comments about the "world stage". Replay the video and note on the very first slide. The Mission is to "develop global citizens of tomorrow."

Shouldn't the mission be to develop students who can read, write, spell, add and subtract, and who know how to learn?

Was the superintendent practicing for a Ted Talk?