On June 17, 2022 Gov. Henry McMaster signed S.202 into law. What was this Bill?
S. 202, when signed, allows the Governor to go after Richland Two School District. He can direct the South Carolina Inspector General to investigate Richland 2.
You're familiar with all the chaos and antics of the past year. Things got so bad in the fall that the board decided to hire an outside consultant to help them. No doubt she tried. And failed. Within a matter of days things got worse. And then worse after that.
January 25, 2022 Before the board meeting started, I attempted to introduce myself to a black woman I did not know and had never seen before. As soon as I said, "Hello, I'm Gus Philpott", she shouted, "I KNOW WHO YOU ARE! DON'T TALK TO ME! GET AWAY FROM ME!" Two Richland 2 security officers came over and within minutes I was on my way out of the building - banned until June 30, 2022 at 11:59PM.
Then she turned on a 14-year-old student and cussed him out. The student told me what she said. A white man intervened on the young man's behalf, and then Baron Davis came barreling over and had to be restrained. The white man was the second man kicked out of the meeting. He said he was told by the Director of Safety & Security that Davis said to put him on No-Trespass Notice.
Who was that woman? Pamela Davis, wife of Supt. Baron Davis and teacher at Blythewood High School.
I filed a complaint against her with the Blythewood H.S. Principal, and I have never heard one word from the District. Where did they bury my complaint? Probably in the same place where they have bury most of my complaints.
There has been more chaos, disorder, upsets, antics.
Hopefully, the South Carolina Inspector General will swoop in and clean house. One person in the spotlight, who should not be cleaned out, is Lashonda McFadden. She made a mistake, for which she has apologized, but she was teased and taunted. McFadden has endured disrespect from Teresa Holmes since almost the beginning of her term in November 2020. Listen to the remarks of the fifth speaker in Public Participation on May 25, 2022. This speaker nailed what has been going on with The Core Four on this year's school board.
Listen to her remarks on livestream.com/richland2 beginning at 1:25:00.
I wish I had been present that night. I would have been on my feet, applauding her remarks.
at June 21, 2022 No comments:

Why Does Teresa Holmes lie?

This post appeared last week on the private Facebook group of "DrTeresa Holmes". My thanks to one of her friends who emailed it to me.

Why would Teresa Holmes, sitting as Chair of the Richland 2 School Board, post this? In case you can't read it, under her name it reads

"This man is asking people to follow board members. He also previously asked people to sit outside of James Manning's home to take pictures, knowing he has a young daughter at home..."

The truth? I have never asked people to follow board members.

The truth? I have never asked people to sit outside of James Manning's home to take pictures.

Since I never asked people to follow board members or to sit outside James Manning's home to take pictures, is Holmes' post actually libelous and defamatory? I feel like she is accusing me of stalking board members and endangering a child.

Is this conduct unbecoming a board member and board officer?

Perhaps Teresa thought I wouldn't see that post, because she has blocked me from her private group.

Should I trot right down to Richland County Sheriff's Department and file a complaint against her for Harassment? If I do, my report will not be full of lies, as was hers against me on March 20, 2019. 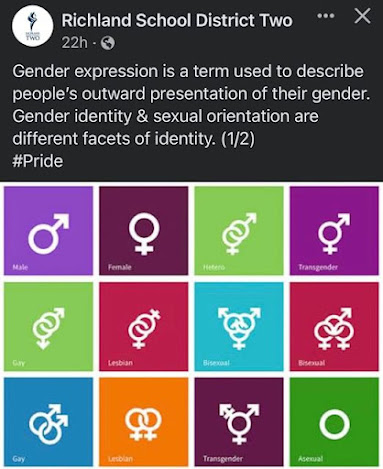 Is there any confusion about the reason that kids are confused? Who am I? What am I? Am I really a (fill-in-the-blank)?

Is it true that, at Disney, greeters no longer can call out "Ladies and gentlemen, boys and girls..."?

What do they say? "Y'all standin' there, listen up."

If Richland 2 would add two more rows of symbols to that chart, it would make a Bingo card. Then it might at least be worth something.

Richland 2 ought to be teaching Reading, Writing and Arithmatic. Checkbook balancing. Budgeting. Wise Use of Credit. Spelling. Reading and writing comprehension. Grammar (he/she/it). How to prepare for a job in the real world. True history.

And, most importantly, how to think for yourself.