Safety app - know about it? 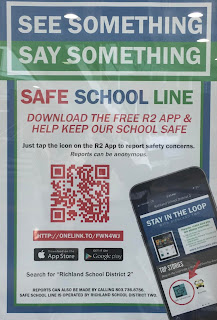 Know about this? Download it from PlayStore to your Android. Really?

A search of PlayStore just now reveals one app, which is for the school District, not a specific safety app. Is this safety app buried in the Richland 2 app?

Sure wish I'd had the safety app on January 25th!!!

Did R2 just threaten me?

Last week, when Richland 2 taxpayers, parents and I were looking for the Proposed 2022-2023 budget, we couldn't find it anywhere on the District's website. A public input session on the Budget was announced in the Agenda published for the April 7th school board meeting.

Some of us thought the proposed budget ought to be available for inspection. How else would one be able to provide input on it? I had no doubt that a Proposed Budget for the next school year existed and had been in the works for months. No organization with a $300,000,000 annual budget lets it go until the last 1½ months.

Here's the response I received from the District:

A proposed 2022-2023 General Fund Budget does currently exist. The district is still in the input/information gathering steps as outlined on the timeline: https://www.richland2.org/Departments/Business-Services/General-Fund-Budget​.

You stated in the April 4 form that you "just wasted a fair amount of time trying to help someone find the proposed FY 2022-2023 General Fund Budget." Based on that statement, I feel compelled to caution you from representing yourself as an official source of information on Richland School District Two.

Then Mrs. Roof quickly sent a corrected email, which read,

I just saw a typo in my response to you. I should have stated A proposed 2022-2023 General Fund Budget does not currently exist. The district is still in the input/information gathering steps as outlined on the timeline: https://www.richland2.org/Departments/Business-Services/General-Fund-Budget​.

I apologize for my mistake.

I appreciated her quick Correction (not really a "Clarification"). It was a simple error and was caught quickly and corrected. No big deal, for me. Frankly, I think she was correct the first time; i.e., that the proposed Budget does exist but isn't ready for publication yet.

Now, the part of the communication that greatly concerned me is this:

You stated in the April 4 form that you "just wasted a fair amount of time trying to help someone find the proposed FY 2022-2023 General Fund Budget." Based on that statement, I feel compelled to caution you from representing yourself as an official source of information on Richland School District Two.

Libby Roof knows, and everyone is the District knows, that I have never represented myself an an "official source of information". Not even close!

So where did that come from?

Does she really "feel" that way? Was she instructed to put that "caution" in her response? Who would have told her to do such a thing? Are all my communications to the District monitored? Do employees do as they are told, even if they object?

Mrs. Roof is a nice person. Personally, I don't think she ever would have written anything like that on her own. She's a great loyal, trustworthy, kind, reverent, obedient, hard-working employee.

Go back and read what she put out after the bruhaha in the board room on January 25th. The statement which was put out then had to have been crafted and approved well above the Media Relations Department. (I worked in a corporate HR department of a Fortune 50 company and saw how formal press releases on difficult issues were "massaged" by the lawyers.) There's a two-year Statute of Limitations on that one!

If a threatening message is going to be sent to me from the District, it had better come over the signature of the Superintendent or an attorney for the District, and not from Media Relations. And they'd better have their facts lined up, because they are going to need them. They have found one man who is not intimidated by them and who refuses to be bullied.