What will happen if only "The Four" show up at the September 22nd Special-Called Board Meeting? "The Four" are Holmes, McKie, Caution-Parker and Manning.

Even if Lashonda McFadden shows up, making five there, there will NOT be a legal quorum. There will be only three legal members of the board.

Even if Monica Elkins shows up, there won't be a legal quorum. There will be only four legal members of the board.

That's because Holmes and McKie are not legitimate members of the board. Neither has EVER taken the oath of office legally.

For there to be a legal quorum, Caution-Parker, Manning, McFadden, Elkins AND Agostini will have to show up.

But look how the balance shifts with that legal quorum.

After the superintendent's proposed revised contract is discussed in executive (secret) session, the board will reconvene in public session.

Caution-Parker or Manning will move to approve it; the other will second it. There will be more discussion.

Perhaps the objectionable terms of the proposed contract will be discussed in public.

Then there will be a vote.

One possible result of a vote by the five legal, legitimate members of the board would be 2-3, resulting in a failure to approve.

Caution-Parker and Manning will vote to approve.

The best outcome tomorrow will be if Agostini, Elkins and McFadden just don't show up.

Then Holmes can show her true colors. How would she handle such a rebuke? Would she just announce that, because there is not a quorum, there is no meeting. And say nothing else?

O.K. Standing by to take your bets now.

THE responsible decision for the board chair would be to cancel the September 22 Special-Called Meeting.
Of course, it never should have been called in the first place. But you did hear the superintendent's request; right?
Supt. Davis said on September 14, ""It would be the recommendation of the superintendent for the board chair to consider a special-called board meeting with only the superintendent's contract on that board meeting..."
Is that not pretentious? Self-serving? Ego-driven?
Why would he say "... the recommendation of the superintendent..."? He IS the superintendent. He's sitting right there. He is the one speaking. He's not talking about someone behind the curtain. He is talking about himself.
Why didn't he say, "I would appreciate your considering my proposed revised contract at your earliest convenience, perhaps at a special meeting next week"?
Of course, Teresa Holmes is going to do whatever he asks. You'd think she works for him and not the other way around.
Where's McKie on all this? Why isn't she demanding that her laundry list of student-centered items get on a special-called meeting agenda ahead of the superintendent's contract?
And same with Caution-Parker and Manning?
Who's first? The students or the superintendent? The answer is clear from the agenda for tomorrow night's meeting.
Trustees Agostini, Scott and McFadden can at least control the superintendent's not being more important than the students by just not showing up tomorrow night. ALL THREE need not to show up. If one of them shows, there will be a quorum, and the superintendent will get his raise and the other perks he wants.
at September 21, 2021 No comments: 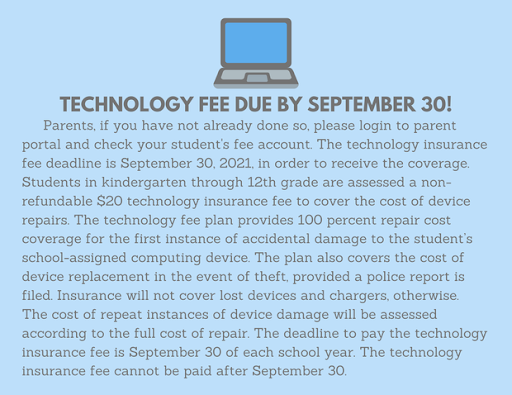 This Notice was posted for website visitors at Rice Creek Elementary to see first-thing.

In case you can't read the fine print, the mandatory $20 annual fee pays for the first repair for accidental damage and for replacement, if the device is stolen and reported to law enforcement. It does not replace a lost device.

How many computers or similar devices does Richland 2 hand out? 28,000?

Is this fund self-insured? If not, it ought to be, because it could probably provide a $400,000 profit to Richland 2.

Can parents see a report on the Richland 2 website about fees vs. expenses? Could the fund still be profitable at $10/year? or less?

How big of a profit-center is the $20 annual Technology Fee?