Come on out at 6:00PM on Thursday, March 3, and meet Joe Trapp, first to announce for the Richland 2 School 'Board.

I know Joe to be a man of integrity and honesty.

He was sitting in the second row of the board room on January 25, when Pamela Davis melted down when I introduced myself. Keep in mind, I did not know who she was. Joe didn't know who she was; nor did Gary Ginn or Ethan L.

But Joe witnessed what happened. And, as he told the school board during Public Participation on February 22, the District never asked him for a statement. Not the night of January 25th. Not since. No one was closer. 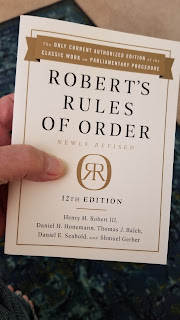 More "be nice" and RONR.

Richland Two trustees (and the two trustees-elect) get a chance to earn some extra pay this month. A Special-Called Board Meeting is scheduled for Friday, March 4, 2022, at 1:00PM. This meeting is at R2i2 and will be open to the public.

That's a laugh. "Executive" Coaching. Maybe it's a fancy name for spending a few thousand dollars to bring in a consultant for a day. There won't be any "executives" in the room.

I hope Ms.Guthridge (if it is she who returns) will know of the intense sniping that has been going on between certain board members, at least two of whom are very likely consulting private attorneys about what is happening on the board.

The dirt is likely not to be fully aired, since it is a public meeting. But you should see the e--mails that are flying back and forth.

Will the consultant hammer board members for acting like children? Like bullies? For finger-pointing and claiming harassment during meetings? For not acting independently, but rather voting almost always en bloc?

What about those board members who work for a living? Must they take an unpaid day off work?

Does Holmes have a job?

What if three board members refuse to show up, because it is irresponsible for them to abandon their livelihoods for a day?

Result? No quorum. No meeting. And the consultant will still get paid.

SRO press event - what a waste! 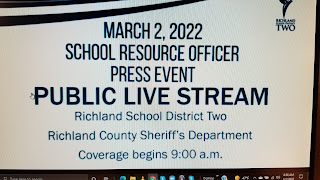 This morning's "press event" was totally unnecessary. It was a "splash" just because it could be put on.

Everthing said or done could have been accomplished with a two-paragraph press release. The superintendent wanted some face-time, screen-time, something to put in his scrapbook.

Teresa Holmes was all gushy and will claim some "bytes" for her next political campaign. Whatever her day job is, she should not give it up to become an emcee. Her egocentric demand for recognition and attention came across as just that. A demand for attention and obedience and acclaim. And False. Where did she think she was? Training at Walmart? I almost expected her to call for a cheer: "Give me an S. Give me a R. Give me an O. S-R-O!"

Board members (four) in attendance, in addition to Holmes, made it a quorum. When a quorum is present, there it is a Meeting. And Notice should have been given, with an agenda. There wasn't. So this morning's meeting constituted a violation of the South Carolina FOIA law.

No question was asked about the cost of the ten new SROs, who began working on March 1 (yesterday). No mention was made of the schools to which they were assigned.