Public Speaking at Board Meetings? Forget it.

At last night's (May 12, 2020) Regular Meeting of the school board, Board Chair James Manning remarked that traditionally the Richland 2 Board has provided two public speaking times at its meetings. He followed that up by saying that not every school board allows the public to speak at meetings.

Who was that comedienne who always said, "Isn't that nice?" Lily Tomlin?

I was waiting for him to say that the public ought be darned thankful that the board lets them speak.

Lindsay Agostini was the only trustee to speak up on behalf of the public and to place value on what the public has to say.

He also said that the public can send email to the board and administration of the district, as if he equates that to standing up in front of the board and saying what's on your mind for three minutes.

Former Board Chair Craig Plank was good about saying at the beginning of Public Participation segments that the board would not respond that night to comments made by the public but that a member of the staff would get in touch with the speaker.

In February 2018 I addressed the Board and requested a survey of teachers, staff, parents and community members on the topic of arming teachers. That meeting was two weeks after the shootings at Marjorie Stoneman Douglas High School in Parkland, Florida.

Did anyone contact me? No, not until I followed up with Craig. The the superintendent called me to tell me there was not going to be any survey.

Of course, I wondered when the board had considered my request and made a decision. It hadn't. The superintendent decided.

Then I requested the District to apply for a grant from the NRA School Shield Safety Program. The money is given with no strings attached, to be used to analyze safety at schools and improve it. Again, no response until I followed up with Craig. Then the superintendent called to say the district would not apply for such a grant. The Board never considered it or decided. The superintendent said No. Richland 2 seeks grants all the time. Why not ask for $10,-15,-20,000 and see what happens? If it had been from the Brady bunch or MOMs Demand Action, they would have run toward the money. But from the NRA? Are you kidding? Take money from the NRA?

What you CAN do is call your favorite board member and try to persuade him or her to make a motion to add an item on the agenda. But board members are already having problems getting items on the agenda. It is the Board Chair and superintendent who set the agenda.

You know those bobbleheads on car dashboards - the ones that move when the car hits a pothole or bounces over railroad tracks? That's our board, except Lindsay Agostini and Monica Elkins-Johnson.

But they don't get any support from the other five board members, when it comes to using common sense. So they could make a motion for some really good idea and, if The Squad didn't like it, you can bank on four trustees voting No.

This afternoon I watched the first 28 minutes of yesterday's (May 12, 2020) Regular Board Meeting.

If you want to see how a meeting should not be conducted, watch it. Take notes. Try to follow what was going on.

The result of the suspension of Board Policy BEDH is that you, the public, the voter, the taxpayer, have lost your privilege to speak at Board meetings and to suggest agenda items to the Board.

Mrs. Agostini solutions and suggestions for allowing the public to continue to participate. She argued for a deadline to the suspension. Her suggestions were ignored by the other six board members.

Mckie interrupted and spoke without being recognized by the Chair. McKie said the suspension was temporary. IT IS NOT.

Elkins-Johnson first said she wanted it only through the summer. Then Manning confused her and she apparently gave up on what she wanted.

Manning said that this board does not intend to squash public participation. YET THAT IS EXACTLY WHAT THEY DID.

Manning said the public can send emails to the board and administration. That is not "participating."

If you hurry, you can still read and print Policy BEDH on the District's website. I urge you to do so.

Last night's discussion did not include mention of the future of Policy BEDH. Will it remain on the website but just be marked "Suspended indefinitely, 5/12/2020"? Or will it be removed?

If it vanishes but you want a copy, request it by sending an email to the District. If you don't get it, email me at gusphilpott@gmail.com

The public should demand restoration of Policy BEDH. Now.

I could write a book about what was wrong with the way the Board handled last night's discussion and decision. Instead, go to the District's video-recording of the meeting and watch it from 19:11 on the timer. It's a three-ring circus. It's a disaster.

If you have a really sharp eye, you'll spot that the screenshot of the website meeting announcement is in error. It reads "Public session begins at 5 p.m." The public session actually began at 4:30 p.m. After an executive session, the Public session was scheduled to re-convene at 5 p.m. 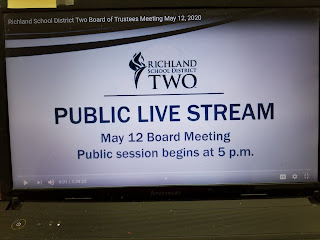 Lastly, the pecking order of images on the Zoom/Livestream presentation of the board meetings should not put the superintendent's screen at the top left. That position ought to be reserved for the Board Chair, who conducts the meeting. Then the other board member's screens should be shown, and the superintendent's screen should be at the bottom right.