What I Would Have Said

I intended to address the school board tonight. Manning created a new Policy on-the-spot to deny a speaker who wished to yield her three minutes to me.

The following are my prepared remarks for tonight's meeting.

Members of the Board and trustees-elect Holmes and McKie,

My name is Gus Philpott.

At the August 16th Special-Called Board meeting, Trustee Manning made this motion: “I make a motion that the board authorizes the District to engage legal counsel to provide best option and legal strategy to address Appropriations Budget Proviso 1.108, including consulting with Richland County Council with regards [sic] to protecting the health, safety and well-being of our students and employees."

As worded, the Motion did not authorize the superintendent to begin legal action. It directed him to get legal advice. He should have brought the best option and legal strategy back to the board for consideration and action. Unless …..  UNLESS … there was a backroom deal in executive session, undisclosed to the public, that it was the board’s intention for the superintendent to proceed with a lawsuit.

Is that what the Chair refused to talk about last Monday? Is that why the board chair stiff-armed Trustee Agostini when she asked for clarification? Had the board already given the superintendent the green light to trot off to court? State law forbids decisions in Executive Session.

Was either of the two personal-injury law firms that filed the case last Friday primed and ready to file? How did the superintendent learn the best option and legal strategy and confer with the Richland County Council so quickly? Did he engage the existing legal counsel for the District at all? He covered an amazing amount of ground in just three days.

The website of neither firm contains any reference to experience, skill or expertise in handling school business.

How did a case get filed in the Supreme Court without Motion, Second, discussion and vote of this board – in public?

I urge you to direct Attorneys Solomon and Hutto to withdraw the filing. Explain to them that the superintendent was not authorized to engage them to file.

The board chair issued a public statement on Friday that was not completely truthful. The chair should be sanctioned by the board for violating Board Policy BBAA.

Did anyone at tonight's meeting have any hearing left after the inspiration moment?
First of all, Amelia McKie, dutifully wearing her mask, mumbled into her microphone in a soft voice that was not amplified adequately in the meeting room. She introduced someone, as students waited with band instruments to enter.
And enter they did. The first to enter carried cymbals. And then came drummers. How many? I counted them: 1-2-3-4-5-6-7. SEVEN. Oh-oh.
Within a minute I decided not to risk what's left of my hearing and I walked out to the atrium. Even out there, it was LOUD. Apparently, I was the only one seriously concerned about hearing loss. Maybe everyone else was just too polite to walk out. How many sat there and thought, "I am going to lose my hearing!"
Why in the world would McKie ever invite a percussion group into a small board room? And it wasn't for just the inspirational "moment". It went on for 5-6 minutes.
I was in the atrium and thought about asking the two deputies to go in and rescue people!
McKie won't be replaced. She is a full-fledged member of Team Holmes and The Squad. And not even a legitimate board member.
at August 24, 2021 No comments:

R2 Board - ignorant of voting procedures 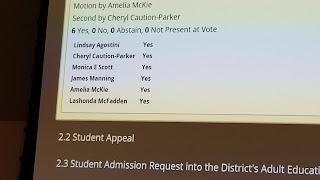 As I arrived tonight, a screenshot remained on display of the vote to enter executive session. Can you spot what's wrong?

The Richland 2 school board counts seven trustees, including the two trustees-elect who are illegitimately allowed to serve on the board.

Notice that there are only six names. Who's missing? Holmes. (Manning explained her absense when the regular session re-convened.)

That's six; not seven. How is the seventh board member accounted for? She is not. And she should be.

You Can't Make This (fill-in-the-blank) Up!

Tonight's public session of the Richland 2 school board meeting was due to re-convene at 6:30PM. I arrived at R2i2 about 5:50PM and the guard at the door asked politely if I would be speaking tonight and then directed me toward the sign-up table. After visiting briefly with the three RCSD deputies, I thanked them for being there to protect me from the board members. Then I headed over to the sign-up table.

The sign-up sheets had already been collected for the board, even though they were in executive session. The R2 staff person explained that sign-up time ended at 5:45PM. WHY SHOULD THE PUBLIC HAVE TO SIGN UP MORE THAN 45 MINUTES BEFORE THE START OF THE MEETING?

I was polite to the staff person. She's not the one who makes stupid rules. She apologized more than once that I couldn't sign up, and I finally suggested she didn't need to continue apologizing, It wasn't her fault.

I had looked at the district's homepage for the sign-up times. It seems to me the times used to be in the middle of the paragraph. When I didn't see them, I failed to read to the end. Then I learned that four people had arrived and had signed in, and I went to join them.

One of the women very kindly offered to yield her time to me. I didn't want to accept it, because she had planned to speak.

When the Public Participation portion began, that woman was the second speaker. She stated that she wished to yield her time to me.  (1:25:30)

Vice Chair Manning was running the meeting tonight, and I couldn't hear whatever flimsy excuse he made, but I could tell that it amounted to "No".

NUMBER ONE - Having to arrive more than 45 minutes before the beginning of the meeting is flat stupid! Who is the idiot in the school district who came up with that plan? Did not anyone on the staff say, "Wait just a damned minute! Why should someone have to show up 50 minutes before the start of the meeting to sign up to speak?" Of course, all staff know they'd better not say anything about being helpful to the public!

NUMBER TWO - Why shouldn't someone be able to yield their time? Manning just made up a new "Policy" on the spot.

NUMBER THREE - If six people sign up to speak, #6 is going to have to wait until the second Public Participation segment. That could be 2-2½ hours after the first segment. Why doesn't the board hear all public speakers for 30 minutes and give more consideration to the public???

The board meeting has concluded and now I'm able to play the recording and hear why Manning denied the second speaker's request to yield her time to me.

Listen to Manning's excuse to Speaker #2, as he denied her request to yield her time. (1:25:30) Manning said, "We're not allowing time to be transferred." The second speaker objected. Manning said, "That's the policy I'm putting in place. We're not doing that right now."

So where did Manning get the authority to create a new Policy on-the-spot? And why didn't any board member object and call "Point of Order". If I hadn't been the one who was waiting to speak, would Manning have allowed the speaker to yield her time? What would the board have lost by allowing that?

Manning was wrong to arbitrarily put a new policy is place. Did he infringe on my right to speak, since speaker #2 was yielding to me? Does this become a Constitutional issue?