Cartoon says it all 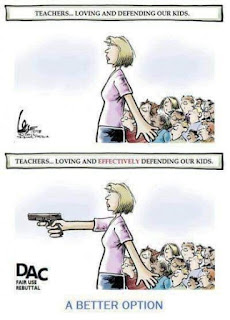 This cartoon showed up on my Facebook page today.

The top panel was published somewhere. I can't read the originator's initials; and somebody copied it and added a caption at the bottom of it.

This is exactly what I said to the Richland 2 school board at the end of February 2018, two weeks after the shooting in Parkland, Florida.

I'm pretty sure my words were, "If some madman with a gun is trying to break into a barricaded classroom to kill students, won't you wish that the teacher had a gun?"

I'd like to hear the answer from each board member. Maybe it's time to ask that question again.
at February 16, 2020 No comments:

On January 31 The State newspaper reported that four Ridge View High School students had been arrested in a sex assaults escapade that spanned two days. You can read that story here:

https://www.thestate.com/news/local/crime/article239845468.html
The State's story does not even appear on the first two pages of Google search results.

Other Columbia media reported on this but has nothing new since January 31. To read other reports, search Google for "Ridge View, sex assaults".

Richland 2 School District notified parents and employees that week, but not the media, with a message that read, in part, ""We became aware of an incident that occurred earlier this week that was a violation of our district’s Student Code of Conduct.  ..."

"Incident"? Seriously? Violation of Student Code of Conduct? In my opinion, this is an example of P.C. disclosure by the school district, carefully worded per lawyers' directions with the hope of keeping the District out of a lawsuit. (In the 1990s I was able to watch an executive of a Fortune 50 corporation craft a statement for public release about something of national importance. The drafts were back-and-forth between executives and the lawyers until they were "perfect".)

That "incident" was reported on Richland 2 - Unofficial Blog on January 31 here:

Since then, two 14-year-olds and two 15-year-olds have enjoyed a media black-out.

Nothing has been mentioned at school board meetings. What do the seven trustees on the school board know about it? Anything? Has Administration informed the board? How quickly was the board informed?

In what school years are these "outstanding" representatives of the Richland 2 system? What other trouble have they been in, either in or out of school? What other disciplinary events at school include their names? Has the District begun the process to expel them?

Or will they be coddled and run through Levels I, II and III of the disciplinary process? Will they get a second chance? Will this be diminished to help them avoid the "school-to-prison pipeline"? They should have thought about that before they began the "incident".

Each deserves time at DJJ, if they are guilty. How about treating them as adults and releasing their names? Let parents, students and prospective employers know who they are!

Parents - please start showing up at Richland 2 School Board meetings. Claim your three minutes during Public Participation to demand answers to just how Richland 2 is keeping your child(ren) safe from perverts like those four students.
at February 16, 2020 No comments: