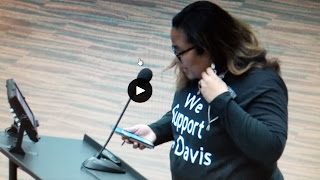 I don't remember the name of this speaker on February 8, 2022, but she was one of several who were sporting new t-shirts and sweatshirts. This one was black. "We Support Dr. Davis."

A different attendee wore a pink t-shirt with the same wording. Somebody was really busy. Whose brainchild was that? The Davis Fan Club?

Were the superintendent and his wife feeling a little bruised by all the bad publicity following Mrs. Davis' outburst on January 25?

Will the t-shirts be back on February 22?

Near the end of the meeting the superintendent said (4:14:23), while reading his prepared statement from his tablet, "For those who woule be concerned about the future of this district and my future, let the record show that I'm just getting started."

Why would anyone be concerned about his future?

Anyone holding his breath?

The superintendent was followed by Teresa Holmes' closing comments. At that point the trustees had been at work for four hours fourteen minutes. Wouldn't it have been nice, if she had just said, "Thank you for being here tonight. May I have a motion to adjourn?"

Instead, she rattled and rambled for over five minutes.