Should Richland 2 School District publish information promptly on its website about gun and other weapons, fights, school disruptions?
Rumors were flying this week about shots fired at or near Ridge View High School. Some posters on social media thought they were fired on the campus of RVHS; others thought they were fired nearby. Some thought perps were apprehended in the RVHS parking lot.
Individual schools sometimes send out alerts to parents.
Why not post all the information on the District's website for all to see?
I can think of one good reason. That is that, then, many more people would know about the levels of violence and threat to the students.
Think more people would show up at school board meetings?
at September 30, 2022 No comments:

Teresa Holmes and the Richland 2 logo

Teresa Holmes has a Facebook page that is private. I'm not supposed to be able to see it. But ...

Here's what she recently posted, after Richland 2 issued a press release that questioned the use of a District logo on a campaign ad.

Isn't that great? Watchdog Teresa is "on the move".

What she forgot to include was a copy of her own ad: 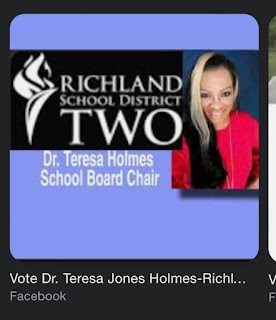 Sort of looks to me like the Richland 2 service mark. Comments?

This is NOT a promotion of Holmes' candidacy. Through her chaos-creation and antics of the last school year, she has earned the privilege of coming in #12 on election day in this race.

Notice the outright lie in her ad? She is not the "School Board Chair". That ended on June 30, 2022, before she filed for re-election!

Angela Nash on Richland 2 logo use

School Board candidate Angela Nash delivered a very important and powerful message on Facebook. She began with comments on the school district's whining about someone who put together a flier with names and photos of four candidates and dared to include the District's logo.

The District's friends in the media jumped on it like it was the biggest news story of the year. The candidates had not created the flier; it was created by their supporters.

No one in his right mind ever would have thought that the District was promoting those four candidates. People are wondering who complained to the District. Did someone? Or did someone on staff decide, "Whoa! This is a big violation. Stop the presses!"

When I saw the flier, all I thought was "those four are in the race that is happening in Richland 2."

But Richland 2 made a big deal out of it. That's called going after "low-hanging fruit".

Then Angela addressed comments online by Chris Leevy Johnson. Chris is a good friend of the superintendent and of "certain" current school board members. One of Chris' posts referred to "MAGA-MAFIA". I saw Chris' post and he also referred to "neo-conservatives".

One of those "certain" members is Teresa Holmes. Angela did not mention that Teresa created a campaign flier that very clearly uses the District's logo. I wonder - has Teresa removed all signs and campaign fliers with that logo?

Watch and listen to Angela's powerful message! She spoke only for herself, but her words could be those of other strong candidates in this race. Not all of them, but of some of them.