A Colorado school district went nuts last week, when it suspended a 12-year-old student who inadvertently allowed a toy gun to be seen by the camera of his home computer during a virtual class. 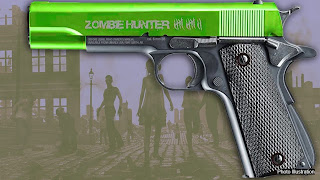 A different news article said the boy was seated on a sofa and moved the "gun" from one side to his other side. The teacher thought it was a toy.

Could that happen here?

The boy, a student at Grand Mountain School in Widefield School District 3, Colorado Springs, Colorado, was attending a virtual art class. The teacher reported it to her principal, who sicced a deputy of the El Paso County Sheriff's Department on the boy at his home without notifying the parents.

See the school's CYA statement in the news article. It's one of those carefully- and thoughtfully-worded statements prepared by a school district's lawyer to try to shield a school from a lawsuit.

Most readers today won't remember the days when boys drove their pick-up trucks to school with the rifles slung on brackets in the back window. Or the days when there was a after-school rifle club.

Now a school is like an airport. One doesn't even dare to say the word "gun".

Is the School District set up to intrude into a private home? If it's obviously a toy gun, should anything be said? Suppose Mom or Dad walks into the room and stops to observe the son's school work. If s/he is "packing", will the teacher call the police and report a gun in the classroom?

Is Richland 2 School District full of teachers and other staff who are anti-gun?

On February 28, 2018, two weeks after the shooting in Parkland, Florida, I asked the school board to consider surveying teachers, staff, parents, and community members on the issue of arming teachers. The superintendent made the decision for the board by informing me there would be no survey.  I wondered who put him in charge of the Board.

The whole mess in Colorado Springs could have been handled by a simple phone call from the teacher to one of the parents. But today's teachers are afraid to demonstrate such independence and individual thinking. They fear Administration. And that's why there is a huge bureaucracy, such as in District 2 here, that sucks up millions of dollars that could otherwise go into instructional services.