Read this article about the Texas Attorney General and his position on arming teachers. Printed in The Epoch Times on May 26, 2022, AG Ken Paxton suggests arming teachers.
For the same reasons I suggested exploring that idea over four years ago at a Richland 2 school board meeting on February 27, 2018, two weeks after the shootings in Parkland, Florida.
What are the reasons?
- "make it 'more difficult' for people to get in..."
- First Responders can't get there in time to prevent a shooting.
- Police Officer (or Deputy) may not be at the right place at the right time.
- Very short periods of time involved.
- Schools are gun-free zones. The good guys, the law-abiding guys, will not have guns. Shooters know that.
If you were in the boardroom that night in 2018, you could have felt the temperature drop 40º. Actually, what I suggested was a survey of parents, teachers, staff, community members to determine the Will of the People. Although the board chair had announced at the beginning of Public Participation that someone from staff would respond to speakers, no one did. I had to chase the answer, and Supt. Davis eventually spoke for the board, without a board discussion and decision, and told me that there would be no survey.
How naive I was at that time to think that the board would consider my suggestion.
At the time there were two armed District employees on campus. Both worked in the Security Office. Both were former law-enforcement officers. At a later meeting, the board decided to formalize the superintendent's authority for permitting them to carry. During Public Participation I suggested the authority should be the Board, not the superintendent, because of the liability involved.
What did the woke Board do? Rather than assuming the authority for final approval of concealed carry by those two employees, the Board decided that NO employee would be authorized to carry.
This is the problem when you have left-leaning, anti-gun people on the board.
Two parents said on February 27, 2018 that they did not want guns in schools. I don't, either. However, if the bad guy comes in with a gun, then I DO want guns in the school - in the hands of the good guys.
at May 28, 2022 No comments:

Slavery - What do YOU know about it?

"A Short History of Slavery"

Think you know enough about slavery? Have you heard people (some people) shouting "White Supremacy!" and "White Privilege"?

How about "100 Premier Men-of-Color"? What does that mean to you? Are they victims who need a leg up? 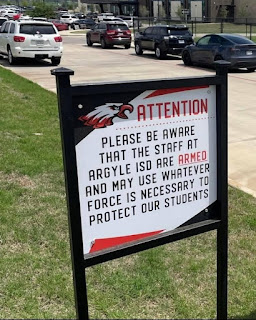 An armed teacher or staff member in a school is like a parachute. Better to have it and not need it, than to need it and not have it.

Arming teachers and staff in Richland 2 schools should be considered, just like every other safety and security measure. It should not be discarded out-of-hand. Not every teacher or staff member would choose to be armed.

In From Luby's to the Legislature, author Suzanna Gratia Hupp, D.C. wrote (paraphrased), "You may not want to carry a gun but, if a gunman tries to hurt your kids or you, you'll wish the person next to you had a gun."

Her parents were killed in a Luby's Restaurant in Killeen, Texas in 1991 by a madman who drove his truck into the restaurant, got out and started shooting people. She reached for her purse and her gun, and then she remembered that she had left it in her car, because Texas law then did not allow carrying it.

Watch her impassioned remarks to a legislative committee on 2/12/2013 here. She worked hard to get Texas to pass its concealed carry law. I heard her speak in Chicago, when Illinois was considering its concealed-carry law.

A Book to Read - Why Meadow Died

I wish to recommend a book to you. I have recommended it to the Committee of the Whole on Safety & Security and to the candidates for the school board who have already identified themselves.

Why Meadow Died, by Andrew Pollack.
The author's daughter, Meadow, died in the shootings at Marjory Stoneman Douglas High School in Parkland, Fla. on February 14, 2018. You might think that Mr. Pollack is against guns. He's not. Please read the book.
That shooting is what prompted me to address the Richland 2 School Board two weeks later, on February 27, 2018. I urged the Board to survey of parents, community members, teachers, and staff on the topic of arming teachers and staff. The board never considered my request, and Supt. Davis rejected it.
Soon after that, I urged the Board to apply for a School Safety Shield Grant. The Grant might have been $15,-20,000 of unrestricted funds, to be used by the school district to improve safety. Again, the board never considered my request, and Supt. Davis rejected it. I felt it was not considered because the Grant would have been from the NRA.
And here we are today. Still "talking" about safety and security.
at May 28, 2022 No comments: