Recently I asked the District for its procedure for issuing Trespass Notices.
Do you know there is a whole set of rules, regulations, guidelines, etc. that apply to almost anyone connected in any way with the school district? If you looked at the Board Policies and thought "Federal Government, move over", wait 'til you start reading the Administrative Rules, referred to as AR something-or-other.
When you have insomnia some night, you'll want to start learning them. Or maybe you won't. I'm not even sure where to find them on the District's website. Or IF you can find them there.
It's a little like driving into a small town where the 15MPH Speed Limit sign has been knocked down, and you get pulled over by Gomer Pyle and he tickets you for speeding.
Here is the section that interested me:

“No Trespass” Notices
District and school administrators, after school or after hours program managers, district security and safety staff, school resource officers or other on-duty, or extra-duty law enforcement officers assigned to work at a school or event may issue a verbal or written “no trespass” notice for the school facility, delay the entry of a person for cause, or ask for the removal any such individual as necessary. On-duty law enforcement officers patrolling a school campus after-hours may also issue a “no trespass” notice to individuals who are not in compliance with a school’s “no trespass” sign or rules, are causing a disturbance, or are not in compliance with a local law while on school property.

I was immediately interested in the wording that allows a designated person to issue a notice "for the school facility..."
Clearly that means "the" facility where a violation (not necessarily a "crime") occurred. The AR does not say that the notice can be issued for all school "properties, facilities, campuses and buildings". It reads "property".That's singular.
So I have filed another Complaint against Marq Claxton for misapplying the AR and have requested that the Trespass Notice to me be rescinded and that all erroneous notices currently in effect be canceled.
Further, the AR does not guide the authorized person about the period of time for the Notice. Therefore, it is vague, indefinite, indeterminate, unclear and unenforceable, because all Notices seem to be issued for the remainder of the School Year.
at March 09, 2022 No comments:

At last night's (3/8/2022) school board meeting the Trustees approved the Minutes of the February 22nd meeting. Those Minutes included Item 9.1 Budget Surplus and the allocation of $6.45 million for a "one-time bonus of $1,000 net after taxes to all full-time, permanent employees and a one-time bonus of $500 net after taxes to all part-time employees."
Even though the verbal explanation of the bonus by the superintendent did not agree with the written document and even though the Motion was wrong, the trustees passed the verbal motion.
So it looks like the employees will get their one-time bonuses before I can get my hands on that money.
But I didn't want "that" money, anyway.
When the District has to compensate me for what the Media Relations Dept published about me and what the Chair and Vice-Chair said about me, that is the money I'll get. And get it, I shall.
at March 09, 2022 No comments: 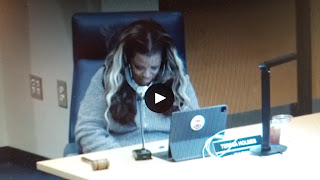 What was the delay last night following the Pledge of Allegiance?
Did anyone else notice it?
As the trustees sat down, the camera shifted to Teresa Holmes. (1:22:29)  Teresa sat down and immediately picked up her cell phone from her desk. Holding it in her lap, she apparently read some message on it. Then she looked briefly at the screen on her tablet and back down at her phone, which she was holding in her lap below the top of the desk.
She continued to read it, ignoring the rest of the board and the public, as they awaited her calling the next item on the agenda. She fumbled trying to drop it in her purse and was further distracted.
Why didn't the Vice Chair say, "Madam Chair, we are waiting for you"?
Finally, she hit the button on her microphone and the meeting continued.
Board Policy BEDL Board Members and Electronic Communications

What was the nature of her electronic communication that interrupted her attention to board business?
Will she say, "Oh, that was personal and not subject to BEDL"?
Can we believe her?
Should I submit a FOIA Request for her phone usage at that point of the meeting? Why was her phone even out on her desk, after the meeting started?
at March 09, 2022 No comments:

Yesterday I filed a complaint with the South Carolina Department of Education about the failure of the Richland 2 School District to hold the Public Input Session for ESSER 3 funding that was scheduled on December 14, 2021.
The item was on the agenda for the beginning of the meeting. Board Chair Teresa Holmes blew right past it and never mentioned it that night.
The Minutes of the December 14, 2021 board meeting were presented to the board for approval at the January 11, 2022 board meeting. The Minutes included the ESSER 3 Public Input Session. That Session had never been held. How could it be in the Minutes?
I believe it was Trustee Lindsay Agostini who tried to amend the Minutes in January, because the Public Input Session had not been held. Her motion to amend was defeated.
Trustee Agostini raised the question at last night's board meeting about why the Public Input Session had not been held.
Media head Libby Roof answered for the District and said no one had signed up to speak that night.
Well, THAT is a No Pass.
The Public Input Session was had been scheduled. Obviously, it was required, or it never would have been on the agenda. The Chair should have called the agenda item and announced that the Public Input Session was open.
The Chair should have announced that no one had signed up ahead of time, and she should have asked if anyone wished to speak. The proper wording would have been: "The public input session is now open. Does anyone wish to speak? (Pause) Does anyone wish to speak? (Pause) Does anyone wish to speak? (Pause). In the absense of any member of the public wishing to speak, the public input session is now closed. The next item of business is ___."
This is a very basic parliamentary procedure.
How was anyone even to know that the public input session was to be held and what input was being solicited? Perhaps I missed the District's information and announcement.
Even if no one signed up ahead of time, the session should have been called and then, after no one wished to speak, closed.
Public bodies should not sweep away required public input sessions.
at March 09, 2022 No comments:

Did you attend or watch any part of last night's Richland 2 school board meeting?
The item on the Agenda, "Inspirational Moment", should be re-named. What in the world was Amelia McKie thinking, when she invited the kids to play for the board? They tried hard; they did well, considering. But the result was horrible. The kids have not yet developed tonal agreement, and the teacher/conductor should have known it. I was a beginning band student many years ago. The only way you get better is practice, practice, practice. Invite them back in 6-8 years.
And a standing ovation from the board? Really?
Apparently, no board member, including the Board Secretary, read the Minutes of the February 22, 2022 board meeting. Had they read them, they would have noticed the error at Item 10.3 BEDI. The Minutes are incorrect. The Minutes record that the Motion passed. According to the voting record shown, it failed.
For: Agostini, Scott, Manning
Against: Caution-Parker, McKie, Holmes
A 3-3 tie? Vote fails.
What's missing is the Yes vote by Mrs. McFadden.
This is why the announced vote at meeting should be the votes For and Against, and then the result. Instead, Holmes often announces the result and sometimes not even the vote count.
The Board Secretary is responsible for the Minutes. While she is not the recording secretary (a District employee is), McKie should be reading the Minutes with a critical eye and either getting them corrected before they are sent out to Trustees and placed in the Agenda, or she should be asking for the Minutes to be removed from the Consent Agenda and corrected.
Fourteen-year-old RVHS student Ethan Lopez made excellent comments during Public Participation. Be sure to listen to Ethan's remarks on livestream.com/richland2, March 8, 2022, beginning at 1:28:04.
He told the board what he had seen and heard on January 25, 2022. He heard Pamela Davis call him an "effing child" and say "... will be put in your effing place". She then called him "a piece of (inappropriate word)". (The word starts with "s" and ends with "t:; fill in the blanks.) He saw a cop and board members restrain the superintendent.
None of that was reported in the statement put out by the District's Media Services Department.
James Manning interrupted him. Wrongly, I shall add. Manning should have kept his mouth shut. He is not the Chair. Was he trying to protect the superintendent and Pamela Davis? Manning also said it was a personnel issue that was being addressed by Administration. IT IS NOT. The January 25 event was swept under the rug.
Trustee McFadden challenged Manning's objection, saying that Ethan should have the right to speak.
The Chair ruled in Ethan's favor and "let him" continue. It also appeared that she extended his time to compensation for the interruption. Holmes had introduced Ethan by his full name and had it on paper right in front of her. But then she didn't know his last name and asked him. Dumb!!!
Will Pamela Davis be disciplined for conduct unbecoming a teacher? Will she be suspended? Will her pay be docked? Will she be fired?
at March 09, 2022 No comments: