Mark Twain banned. What about here? 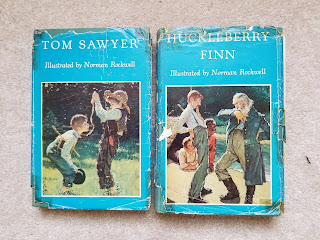 According to a recent email from Hillsdale College (Hillsdale, Michigan), Mark Twain's book The Adventures of Huckleberry Finn "has been banned in thousands of public schools across America."

The book, published in 1884, has been a staple in many households. What's wrong with it?

I have a boxed set of Tom Sawyer and Huckleberry Finn, illustrated by Norman Rockwell. No, not first edition (darn it), but they are as old as I am.

I guess it's time to re-read them and find out how warped my upbringing was, just by having them in the same house.

What about in Richland 2 schools? Is it read? Is it ever mentioned? Has it been banned here?