Imagine my surprise last night when I looked for a bathroom at R2i2 last night. Did I dare enter? Seriously? Are you kidding?

That sign was on the former Women's restroom at the rear of the first floor. Where else are these signs showing up?

Fortunately, I already knew the Men's restroom was opposite it.

The handicapped world should be rising up in protest over having to share a bathroom sign with three of the 13 genders. If RSD2 wanted to provide equity (or would it be equality?), would it post a sign for all genders?

Is any man brave enough to enter that restroom? Suppose there are women or girls in there and a man enters? How loud will be screams be?

What if you walked up to a bathroom and were confronted by these signs? 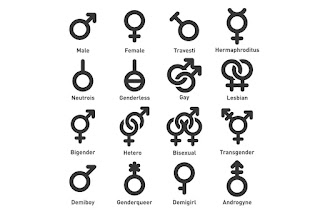 By the time  you figured out whether it was .safe to enter, it would probably be too late
at September 14, 2022 No comments:

Terrance Staley for School Board


I met Terrance Staley at last night's board meeting and spoke with him briefly before the meeting. He has very strong qualifications for a board position.

Due to his military and other experience, he has elected to avoid social media.

He is a solid candidate and is deserving of full support.

All the back-biting, one-upmanship, sarcasm, personal agendas and chaos would be gone. What a powerful board this will be.

NOTE: Let me know if the copy cannot be read, and I'll type it in large letters. Or email me at gusphilpott@gmail.com, and I'll forward a copy that is very readable.

Just how bad it is at Blythewood Academy?

At previous school board meetings, Trustee Lindsay Agostini has stated that she will not vote in favor of a student appeal motion that involves sending a student to Blythewood Academy.
Now you can get it first-hand from a Richland 2 student who was recently transferred to Blythewood Academy.
Go to https://livestream.com/richland2/events/10609944 and "fast-forward" to 1:26:06, when William Patrick is introduced. Mr. Patrick was followed by his daughter, Julie, who was followed (after Gary Ginn spoke) by her daughter, who is a student at Blythewood Academy.
What kind of behaviors are there at Blythewood Academy?
Toxic and dangerous environment. Known gang members. Violent offenders. Kids who have been to jail. Fights. Foul language. Teachers using foul language in classrooms. Students possessing prohibited items in school. Students have brought guns and bullets into school and have made bomb threats. Slurs spoken in classes. Last week a student got jumped in a bathroom and was covered in blood. Passing metal detectors with phones and vaping devices. A male student pointed at her head with fingers as if pointing a gun. Students attending who have charges of assault-and-battery and possessing a gun on school grounds.
Mr. Patrick was quite passionate in his statement, and he exceeded his three minutes. He was almost done.
What did Chair James Manning do? He called for Security to remove the man from the microphone!!!
What a stupid action for Manning to take!
Mr. Patrick was an excellent speaker. He addressed the board without notes and expressed himself politely.
Fortunately Mr. Patrick stepped back from the microphone as the Richland 2 security officer approached him. Might parents have come out of their seats and surrounded that speaker?
What harm would have been caused by letting the man complete his remarks?
(I was reminded of the night that I was ordered away from the microphone under threat of security.)
The Board had just wasted a long period of time for the Inspirational Moment. Remember when it used to be a "Moment" (that being 2-3 minutes)? We haven't had a short Inspiration Moment (or even one that was inspirational) at a school board meeting for two years!
at September 14, 2022 No comments:

NOTE: Board Chair James Manning unilaterally disbanded the Committee on September 15. Watch for an announcement of the group's meeting, coming soon.
At last night's school board meeting Trustee Monica Scott announced the next meeting of the Committee of the Whole on Safety & Security. The Committee will meet on Tuesday, October 11th, 3:30PM, at R2i2 (not September 27). This is a tentative date, until confirmed.
She had to fight the objections and resistance of Board Chair James Manning, who tried to funnel her through "procedures" for scheduling the meeting. Trustee Scott knew that wouldn't work, because she had already tried that.
The continuation of the work of the Committee is very important, approaching urgent. Not yet an emergency; no one is dead or bleeding.
Hopefully, the Committee will expand to include parents, staff, community members and others who are not under the thumb of the superintendent.
The superintendent and staff have had 4½ years to work on this. At the February 27, 2018 board meeting I requested a survey of parents, staff, tickets and community members on the topic of arming teachers.
NOTE: I did not request the arming of teachers; I requested a survey. Supt. Davis said, "No" without consulting the Board.
A couple of weeks later I suggested the District apply for a School Safety Shield Grant. RSD2 might have received a $15,-20,000 no-strings grant to improve school safety & security. Supt. Davis said "No" without consulting the Board. (The money would have come from the NRA. Ohhhhhh, bad word.)
Where are we now? BeSMART and gunlocks. On a scale of 1-100 for solutions, that's about 0.5.
at September 14, 2022 No comments: