On the Agenda for March 8th Regular Board Meeting is a revision to Board Policy KE - Public Concerns and Complaints. This is THE ONE protection that the Public has to correct ills in-between elections. Now look what the superintendent and the board chair have dreamed up.

"Complaints to one or more board members against any action or any employee of the district or against any administrative rule or board policy will be referred to the superintendent.

"If the matter cannot be resolved satisfactorily by the superintendent, the complainant may register the complaint in writing with the board chair, setting forth the facts on which the complaint is based.

"The board, at its next regular meeting or at a special meeting, will then consider the grievance of the complainant and dispose of the matter according to its best judgment."

Now read Board Policy KE, as the revision is proposed:

Notice anything missing? Right!!! The entire Policy is missing. What the superintendent and the board chair want to do is to eliminate the public's right to have grievances addressed.

Here is how it looks in the attachment to the Agenda: 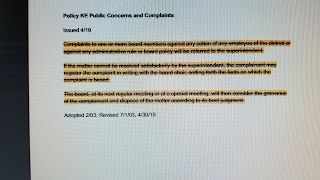 Why would the superintendent and the board chair want to get rid of Board Policy KE?

Maybe they don't want the Board to have to hear a complaint and grievance about the superintendent's wife and how she disrupted a board meeting and swore at a 14-year-old student.

Maybe they don't want the boare to have to hear a complaint and grievance about the superintendent's wife about her pity-party on WIS-TV and her lies about what happened on January 25th in the boardroom.

Maybe the board does not want to have to hear a complaint and grievance about the unfair Trespass Policy and how it was weaponized against two white men on January 25th to protect one black woman in the board room who is married to the superintendent.

Maybe the board does not want to have to hear a complaint and grievance against the Richland 2 Media Relations Department for issuing an untrue press release to the public and to the employees and parents.

WHAT CAN YOU DO?

Communicate by email and phone right now with the seven board members and tell them you do NOT want them to eliminate Board Policy KE. 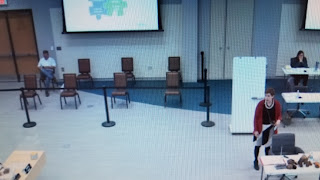 One member of the public showed up fo today's board workshop. Look at the "barrier" that was set up to keep him in his cage. That set-up reminded me of Caution-Parker's utterance in the courtyard after a board meeting last fall. Creating a fence to keep the public in its place is exactly that sentiment!
I could not believe what was going on in today's "workshop", which was described as Executive Coaching and Parliamentary Procedures.
Holmes was not there. The one person who NEEDED to be there was not. Manning explained that there had been a death in the family, but he didn't say what Holmes' relationship was to that person. Was the deceased an immediate family member? Or was it the dog's groomer's third cousin, twice removed. Holmes' missed another meeting within the past year of so for a family death, as I recall.
When Liz Guthridge asked questions, too many times board members just sat there without responding. And she let them get away with it.
Why didn't she say, "If you aren't going to be part of this workshop, just get up and leave. And don't collect your pay on the way out the door!"
Ms. Guthridge is a nice person. This board does not need a "nice" person. It needs someone who will dig in and whip them into shape as a Board.
A recent written interchange from Manning to Scott was sent to Guthridge before this workshop, so that she would know exactly what's going on between board members. It was nasty! Maybe the workshop should have started with her reading that aloud and starting from that point.
I gave up at 1:40PM. Had I been there in person, I would have walked out about 1:15PM.
Manning said, "Nobody knows what to trust or whom to trust." Not true! Some Board members aren't finding anything or anybody to trust! That's the problem.
Most of the board members there today sat there like bumps on logs.
Lindsay Agostini brought up some good points, and the trainer put them on Hold for "later". Sure hope she returns to them.
Not to be sexist about it, but a male trainer was needed. A hard-headed business man. Or a hard-headed business woman, if she met the board head-on.
Richland Two has wasted its money on these two workshops. Wasted the money both on the fee for the trainer and for the pay for the board members!
If you want to know how bad it really was, check it out on livestream.com/richland2 for March 4, 2022.
at March 04, 2022 No comments: