Watch the last 45 minutes of the September 13th board meeting. Go to https://livestream.com/richland2/events/10609944/videos/232910367 and set the pointer to 4:30:28, which is where the open meeting resumes after the second Executive Session.
You may not want to view it as I did, taking notes.
Watch who makes common-sense suggestions for the good of students and parents, and watch who criticizes the "wrecking balls".
Watch who justifies the upcoming trip to Miami.
Watch who says there are no lame ducks. (There are at least three.)
Watch who lies through her teeth.
Watch how Manning argued with trustees, rather than letting them finish their statements uninterrupted. His job as Chair is not to argue or interrupt. Watch how many times he shut down discussion.
Watch who said, "We need to stop this politicking and playing games" and who then proceeded to do just that.
Watch how Manning over-rode Trustee Agostini's Motion (4:50:30) to add a grievance to the Draft Agenda, halting discussion and closing it out by saying he was not going to add that item to the draft agenda.
It wasn't his call. Agostini had made a motion. The Board should have voted on her motion. This is what happens when the board is not well-trained in Robert's Rules of Order and there is no Parliamentarian.
All these antics should come to a screeching halt on November 18, when the new board is sworn in.
Everybody, work really hard to help Teresa Holmes come in 12th.
at September 23, 2022 No comments:

How much does Richland 2 spend on P.R.?

Every week I receive emails giving me all sorts of information about which I care nothing. I suspect few in the media care about it.

Now, I don't want them to stop because, then, I would not know how much money Richland 2 is wasting on P.R.

It's not like Richland 2 has anything to sell. There is no "brand" that the business needs to keep in front of my eyes. Richland 2 has a captive audience and a guaranteed banker (that's you).

Richland 2's job is public education in this district. It sucks up money every year from residents within the District's boundaries and from the state legislature. It gets that money, whether the economy is good or bad; whether there is COVID or not; whether or not (you name it).

The personnel engaged in P.R. are managed by Administration, for which Baron Davis is the superintendent.

The Board is supposed to direct the superintendent. Is that how it works?

If you listened to Davis' remarks at the end of the September 13th board meeting, you heard him say, "... several members of this board continue to support the move and the movement that we are making..."

And there it is - plain as day. The "move and the movement" are his. The board supports it. Four of the board members support it.

What he should have referred to was the Mission of the school board and how Administration is following it. That isn't how he sees it. The brand is his.

Up until now he had had a board that he could manage. That's about to change. In November, hopefully four new faces will join the board. Then there will be a board that leads - that directs, not one that follows.

District Falsifies Minutes of 9/13/2022 Board Meeting 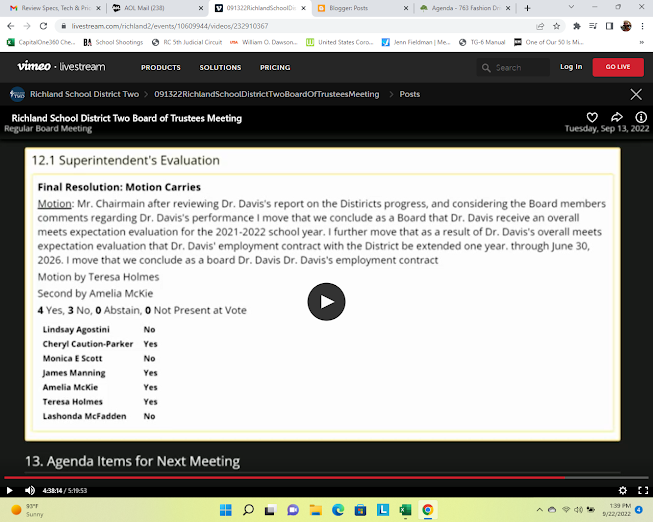 Source: https://livestream.com/richland2/events/10609944/videos/232910367      Fast-forward to 4:38:08
Now read the Motion as printed in the Minutes:
"Mr. Chair after reviewing Dr. Davis's report on the district's progress, and considering the Board members comments regarding Dr. Davis's performance I move that we conclude as a Board that Dr. Davis receive an overall meets expectation evaluation for the 2021-2022 school year. I further move that as a result of Dr. Davis' overall meets expectation evaluation that Dr. Davis' employment contract with the District be extended one year through June 30, 2026."
What's missing? Right! The final sentence.
It's easy to understand how the error happened. If Holmes had simply made the motion, without all the pomp and circumstance and fluff, it would have read: "I move that Supt. Davis be given a Meets Expectation evaluation and that his contract be extended one year." That's all she needed to say.
Instead, she overwhelmed the recording secretary with unnecessary language. Worse then, Holmes, Manning, McKie, and Caution-Parker did not read the Motion to ascertain that it was correct.
Hence, the majority of the board voted to conclude Dr. Davis' employment contract.
And they can't fix that by merely changing the words in the Minutes. No lawyer will tell them that is okay!
at September 23, 2022 No comments: 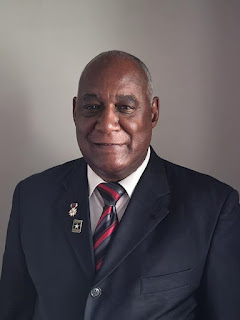 "I am running for the Richland Two, South Carolina School Board because I believe we as a community need to ensure the safety of our youth. We are failing them by not providing them the adequate resources and knowledge to feel safe while attending school. With the climate of the world today, parents, faculty, staff, and students need to be provided the tools and skills necessary to feel safe in any given situation. It would be my duty to provide efficient and intensive training to all involved parties in the community while partnering with local law enforcement. With my background and training through the military, secret service, and developmental training, I have the skills to help guide our community. My role in my family has always been to provide and protect my wife, children and grandchildren to the best of my ability. I would love the opportunity to show that I not only can keep my family safe, but your children, and our community safe as well.
If anyone has any questions of me, I can be reached via email at:
TeStaley2022@gmail.com"

Terrance commanded a battalion (1500 personnel), in which 42 officers (majority white) reported to him. He has the leadership, business, management and professional experience to lead Richland 2 well as one of the four new board members.

Come and meet him. Bring your questions and suggestions. 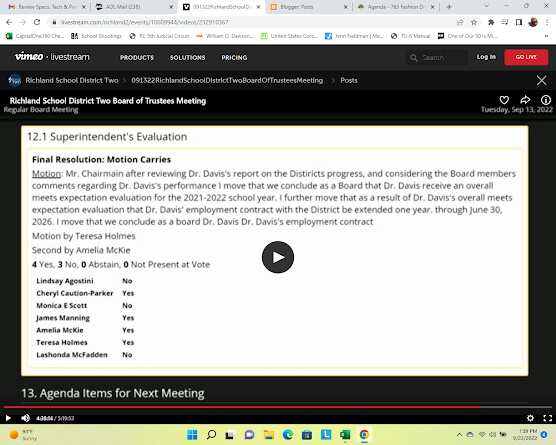 Teresa Holmes made a motion that was displayed to all the world on the screen, ending with: "... I move that we conclude as a board Dr. Davis Dr. Davis's [sic] employment contract"

The written motion that the trustees saw before they voted ended with those words. Did the illustrious majority not read it? Did they not pay attention to what they were about to vote on?

Didn't Amelia McKie, the Board Secretary, need to say, "Just for clarification ..."?

Why didn't Supt. Davis object? Maybe he was just licking his chops over the $360,000 payday that The Core Four just handed him.

Is there any doubt that he doesn't have offers lined up and that he can be back at work on Monday? Does he already have another gig lined up?

When does he leave?

Does Deputy Supt. Marshalynn Franklin automatically slide up into the big office?