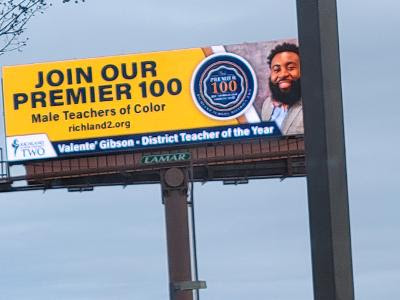 Why isn't this overt racism?

Can you imagine the uproar if a white-owned business advertised its desire to hire 100 White Employees?

BLM and Antifa and the ACLU and Southern Poverty Law Center and who knows what else would be picketing and boycotting tomorrow morning at 8:00AM.

How much is Richland 2 paying Lamar Advertising of Columbia, S.C. to display that ad? How long will it be up there?

Who authorized this billboard advertising? Who thought it up? Well, obviously Supt. Baron Davis gave it a thumbs-up. Was he the one who came up with the idea?

Richland 2 School District should be committed to hiring the best candidates, be they black, white, brown, yellow, red, for the money they have available in the budget to pay for new teaching staff.

No hiring bonuses, no freebies from that "donation" received from the contract janitorial firm.

If you are upset about discrimination in hiring practices, as demonstrated by the Premier 100 program, sound off to the trustees - all of them, and especially to the board chair. Tell them to get the superintendent under control. Tell him to hire the best available teacher, not the best black male teacher available.

Why aren't the women teachers (white AND black) yelling and screaming?

Why aren't the Feds all over Richland 2? Where is the DOJ when you really need them?

Time-Limit on Board Meetings

Should Richland 2 school board meetings have a time-limit? Say, two hours?
Poor planning by the board chair and the superintendent resulted in a December 14th board meeting that lasted four (FOUR!) hours until 10:30PM. And that was after a one-hour executive meeting from 5:30-6:30PM.
There is no real reason for public meetings to last more than two hours. Perhaps at 8:30PM three trustees should stand and walk out. Without a quorum the meeting should end.
Why do meetings last so long?
Sometimes, executive sessions run over the one-hour mark.
Sometimes (often!) the Inspiration Moment is excessive in length.Often Amelia McKie's introduction of the Moment is itself 2-3 minutes. And the Moment itself should be limited to three minutes; perhaps only two. And it should be inspiring!
The pace of Public Participation could be increased by calling the next two speakers to a "ready" area near the microphone. The chair could announce the next speaker and say "Followed by ____ and ____."
And then those lengthy dog-and-pony shows of staff presentations to the Board could be shortened. They are far too long. The board has already received the presentations in written form in the Board Packet. Do very many of the board members bother to read them?
A couple of years ago Holmes asked a question of a staff member after a presentation. The staffer hesitantly said that the answer to her question was actually in the Board Packet. I wanted to cheer. I wonder where that staffer works now. As I recall, Holmes' question had to do with classroom visits by a board member.
Staff presentations should be five minutes and the rest of the time should be spent answering questions, if any, from the trustees. We all know now that trustees cannot get questions from staffers without first being stuffed through the roadblock of the superintendent's office. And there is no need for individual trustees (ex. McKie, Caution-Parker) to "stroke" the staff members with thanks. Thanks should be expressed on behalf of the board by the chair.
Caution-Parker was critical recently of parents who asked questions of the board and then didn't hang around for hours to hear the answers. She totally ignored the fact that parents could tune into livestream recordings to hear whatever was said later in the meeting.
So, Trustees, when it's 8:30PM, why not make a Motion to adjourn the meeting? If (when) it fails, walk out. Holmes will get the message after 3-4 meetings and prepare agendas to cover everything in two hours.
Sort of like training a puppy, don't you know?
at January 10, 2022 No comments: