Community members, parents and others who are interested in the business of the Richland 2 School Board should be aware of changes in the Board's schedule for October 2019. A workshop has been added at the beginning of the month, and the dates of the two Regular Meetings have been changed from the second and fourth Tuesdays..

Check the District's website for the starting times. Workshops often start at 5:00PM or 5:30PM
The public portion of Regular Meetings usually starts at 6:30PM  (after the Executive Session).

* There is no Public Participation segment at Special-Called workshops.
at September 25, 2019 No comments:

The Richland 2 School Board could use a Parliamentarian and a decision to observe Robert's Rules of Order. 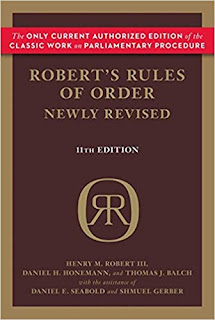 There were too many times during last night's board meeting that one member talked over another. "Kindness" was the word for the night, and kindness was not shown during the discussion of concealed carry on Richland 2 school grounds.

Early in the discussion Dr. Elkins-Johnson made a Motion to replace one word in Board Policy GBEB Staff Conduct. Rather than allowing a second to the motion, the Vice Chair invited a comment by the superintendent, and he passed. There followed extensive conversation and discussion, and then the Vice Chair cut off further discussion with her own motion and quickly insisted on a second, which was provided by Amelia McKie. The Vice Chair then insisted on a vote.

But there was already a motion on the floor, that by Dr. Elkins to replace the word "superintendent" with "Board" in the draft Board Policy. Dr. Elkin's motion was never seconded or discussed as part of her motion, and there was no vote on her motion.

After lengthy discussion the Vice Chair cut off questions and refused to allow Dr. Elkins to continue with comments and questions to staff, so that staff could re-work the Policy revision. The Vice Chair wanted to table further discussion, and she was corrected by James Shadd that the procedure is to postpone, not "table".

During other Board meetings a Parliamentarian would have observed and corrected board members who engaged in side conversations and who used electronic devices during a meeting.

In an official Open Session of a public body, which the Richland 2 Board is, everything said or written is public record. If two members engage in a side conversation, the public usually cannot hear what they say. If electronic devices are used for email, texting, instant messaging, etc., the public has no way of knowing what is being transmitted.

The Parliamentarian should probably not be one of the board members, because he or she will end up not being too popular among friends. It's a dirty job, but somebody has to do it. Or should.
at September 25, 2019 No comments:

When I arrived for the Richland 2 board meeting, I had my remarks all prepared regarding the selection of a small, general-practice law firm that was selected as bond co-counsel for "purposes of achieving diversity in the legal team". After I arrived, though, a more-timely subject came up.

On the way into the meeting I stopped to inquire who the armed man was at a school board meeting last month. He had been walking around in the board room before the meeting and, as he walked away from me, the butt of his small semi-automatic pistol was visible, tucked in holster under his shirt. I learned that two Richland 2 employees are authorized to be armed on school grounds.

Board Policy GBEB Staff Conduct was on the agenda last night for its first reading. Because of the huge liability exposure to Richland 2 School District, I felt strongly that the authority to allow concealed carry on school grounds should rest with the Board, not with the superintendent. And I said so during the Public Participation portion of the meeting. My comments can be viewed on the YouTube recording for the September 24, 2019 meeting at 21:20 on the meeting timer.

"The following list, which is not exhaustive, includes actions that are considered misconduct while on duty or on or off district property, or at any time when the conduct would disrupt the educational environment or impair the employee’s ability to be effective: ...
● possessing weapons on district property (unless otherwise authorized by law)"

Administration was recommending approval of a change, so that this item would read:

When the meeting arrived at Item 12.1 on the agenda, the Board came to life! Teresa Holmes was chairing the meeting in the absence of James Manning, and she voiced her opinion. Monica Elkins-Johnson added extensive comments and questions to the discussion and had many questions for the Richland 2 staff there. James Shadd had questions. Lindsay Agostini, Amelia McKie and Cheryl Caution-Parker stayed out of it.

Discussion was boisterous at times, with trustees talking over one another and interrupting. Incorrect information was stated, and then corrected. Be sure to watch the video. The starting point on the YouTube recording for the Board's discussion is at 56:147 on the meeting timer.

Do you feel it is the Board responsibility to control who carries a concealed firearm on Richland 2 school grounds? Please comment below.