There appeared to be more security and law-enforcement officers present at last night's board meeting than the 20 members of the public who were admitted to the board room. 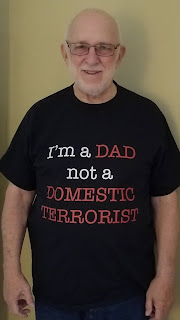 Attendance had been severely limited to 20 by the superintendent's edict last Friday, October 22. COVID was mentioned in the media release, but no one outside Administration believed that for two seconds.
The District seemed to be feeding off the National School Boards Association's (NSBA) assessment of protesting parents as domestic terrorists. The NSBA apologized for its letter to the White House. The knee-jerk reaction at the DOJ and U.S. Attorney General Merrick Garland's super-fast kick-off of inquiries by his Federal law-enforcement agencies ignited a public furor.
You'll want to hear the comments made by ten of the 20 people in the room. Go to livestream.com/richland2 and select the October 26th meeting. Fast-forward (drag) to (1:32:00) for the introduction of last night's Public Participation segment.
Teresa Holmes introduced the public participation segment with a reading and then a condescending comment about her intention to squash anyone who violated her rules. Notice her smug expression during her informal comments and her use of "we", meaning you. She added, "... when we get a little past things, we can open things back and have more people participate."
In other words, "when you people learn how to behave and control yourselves and stop picking on us, we'll let more of you people in." That's what her words meant to me. Notice she does not mention COVID.
And then public participation began (1:34:05).
at October 27, 2021