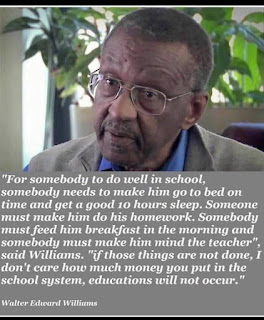 If all you knew about him was what is quoted above, you'd say he was a pretty smart guy.

I encourage you to take a.few minutes and read about Walter Williams on Wikipedia.com    Learn about his upbringing, education, military service, degrees and friendships.

Wikipedia has this to say, "As an economist, Williams was a proponent of free market economics and opposed socialist systems of government intervention. Williams believed laissez-faire capitalism to be the most moral, most productive system humans have ever devised."

And this: "Williams believed that racism and the legacy of slavery in the United States are overemphasized as problems faced by the black community today. He pointed to the crippling effects of a welfare state and the disintegration of the black family as more pressing concerns. 'The welfare state has done to black Americans what slavery couldn't do, and that is to destroy the black family.' "

And "Williams viewed gun control laws as a governmental infringement upon the rights of individuals, and argued that they end up endangering the innocent while failing to reduce crime."